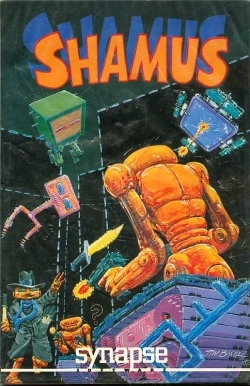 Shamus is a 1982 computer game created by William Mataga and published by Synapse Software for Atari 8-Bit Computers.

Inspired by Berzerk, Shamus, a 21st-century robo-detective, must travel a maze of 128 screens to find and destroy the evil Shadow (himself an Expy of Evil Otto). He must find the right keys to unlock doors, collecting "mysteries" that give points or extra lives (or summon the Shadow), and defeat many, many enemies. You're equipped with an unlimited supply of "Ion-SHIVs", laser throwing knives that can vaporize nearly any enemy in your path.