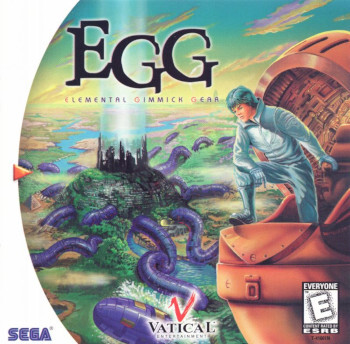 E.G.G.: Elemental Gimmick Gear is a 1999 Action RPG developed by Hudson Soft for the Sega Dreamcast, from a game design concept by Birthday. It follows the story of a man waking up, putting on his massive armour, and figuring out why giant robotic tentacles have just destroyed most of the nearby populace.

Okay, it's a little more in depth than that.

To elaborate: In the world of Tokion, an archeological dig site finds and enters a massive dome-shaped structure, finding a destroyed, egg-shaped mech with a remarkably-preserved man inside. So well preserved in fact, that despite the ruins and the machine being 5000 years old, he's still alive. However, he would not wake up, no matter how hard they tried, so they took him and the machine back to study.

Jump forward another 100 years later, when mysterious pirates have also entered the ruins, and hit the (Quite literal) big red button. The ruin reactivates, sending massive biomechanical tentacles across the land, destroying the nearby town of Eastokion and releasing a thick blanket of fog across the dome and the surrounding area, prompting the survivors to dub the area, "Fogna".

You, as the Sleeper, wake up, put on your massive armour, and go figure out what the heck is going on.

The game is unique in many ways, including the in-game world, which was hand-drawn just for it and is included as an extra on the game disc, were one to put it into a computer.

More to come, I'm almost out of time.