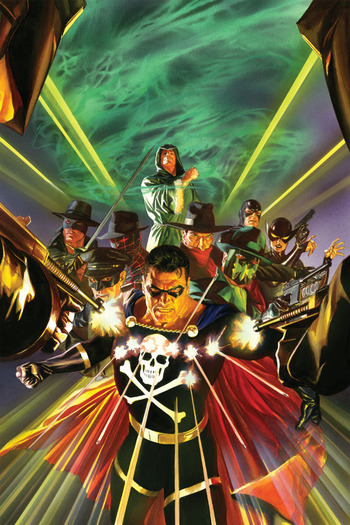 "It’s 1938, and the Justice Party has swept into office in New York State. But the newly-elected officials are in the control of powerful criminals, who quickly corrupt the law to their own advantage. When a fascist police state is instituted, the only ones who stand in defense of the innocent are masked vigilantes like The Shadow, The Green Hornet (and Kato), and The Spider. As the confrontation builds, more masked heroes will join the fight including Black Bat, Miss Fury, Zorro, Black Terror, Green Lama and many more! When the law is unjust, justice must be an outlaw!"

Released by Dynamite Comics in 2013, Masks is a very loose adaptation of the 1938 pulp story "The Spider Vs. The Empire State" (also known as "The Black Police Trilogy") with more Golden Age pulp and comic book heroes thrown into the mix. It got a sequel in 2015 titled Masks 2.