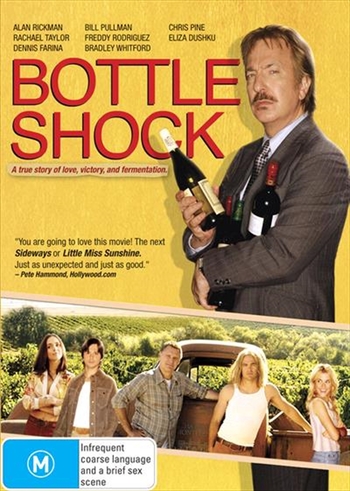 Steven Spurrier: [looking bemusedly at an array of California wines] "These wines are... all so... good."
Jo the Bartender: [irritatedly] "What did you expect? Thunderbird?"
Advertisement:

Bottle Shock is a dramedy, set in 1976, about winemakers in California, and a wine merchant from England with a shop in France. The wine merchant, Steven Spurrier (Alan Rickman), seeking a way to increase business and noticing how American wines are starting to become slightly more popular, decides to hold a competition, which afterwards became known as "The Judgment of Paris".

While touring America looking for David wineries to compete against the Goliath-like French wineries, Spurrier encounters the Barrett family in (not yet famous) Napa Valley, who seem up to the task. Jim Barrett (Bill Pullman) will have none of it, though, thinking this is just a way to embarrass his family on the world stage. His son Bo (Chris Pine), on the other hand, thinks of this as an opportunity and decides to enter their wine without his father's permission. In the end, California wines triumph over French and usher in a new age of wine drinking the world over.