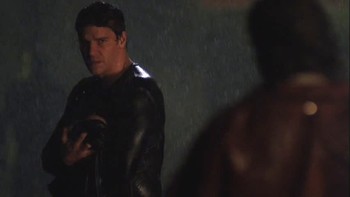 Holtz captures Angel in the hotel and starts to talk with him, but believes nothing Angel says. At Wolfram & Hart, Morrow tells Lilah that she is going to be the one who will get in trouble for this whole mess. Since they have gotten no word from their commandos in awhile and have lost visual, Lilah heads over to the hotel to see what is happening, and ends up getting caught by one of Holtz's men, who thinks she's Darla. Lilah tells Holtz that Angel now has a soul and must atone for his past misdeeds, which Holtz treats with more belief. Angel uses Lilah's distraction of Holtz to grab a wayward grenade that had belonged to one of the dead commandos, and he escapes, with Lilah and Holtz suffering no major injuries. Lilah finds the scrolls and brings them back to Wolfram & Hart for study by their scholar.

Holtz thinks upon what Darla and Angel did to his family. When he returned to find their dead bodies, it turned out that they had not killed his daughter. At first overjoyed, Holtz sees bloody bite marks on her neck and realizes the truth... she has been turned into a vampire. He sits, and he thinks, and he sings a lullaby over and over. When the dawn comes, he leaves the house, carrying his daughter, kicking and screaming and begging not to be taken outside. He hurls her into direct sunlight, and watches as she is destroyed.

Meanwhile, at the car, Darla gets frustrated at Wesley's attempts to teach her Lamaze breathing techniques, since she doesn't need to breathe, and hits all of them, knocking them away from her. When they get ready to leave again, they are attacked by Holtz's forces. A fight ensues, but is quickly ended when Darla runs over most of the enemy with the car. Unfortunately, she then drives away, leaving Gunn, Wesley, Cordelia Chase, and Fred with no transportation, just as Angel finally reunites with them. He tells them what just happened to him, and they realize that Holtz was one of the prophesied forces, brought forward in time to kill Angel, Darla, and their son in order to stop the hope of mankind, therefore bringing about the destruction of the world.

Holtz confronts Sahjhan for not mentioning before that Angel has a soul. It means he must hunt him differently. He is not perturbed at killing a being with a soul—on the contrary, he realizes that killing a being with a soul will free that soul to suffer damnation for eternity. Sahjhan swears he hasn't withheld any other information, but of course he has not mentioned the pregnancy.

Angel locates Darla on a roof in Los Angeles. The soul of the baby is nourishing Darla, causing her to feel overwhelming love for the baby. She realizes after she gives birth, she will no longer feel love, and will even forget that she ever did love her baby, and she will hurt it. She begs Angel to protect the baby from her, and starts to cry, and Angel comforts her.

Back at Wolfram & Hart, the translator working on the Nyazian Scrolls says that. according to them, there will be no birth, only death.

Angel takes Darla to Caritas, which is due to reopen the next day with a spell to stop violence of any kind within the club. One of the demons, who had been working on the place but was fired by Lorne for stretching out the job to charge more, heads to Holtz and tells him where they are. Back in Caritas things are not looking good for the baby as Darla's contractions have stopped and the heartbeat has weakened. Wesley reasons that Darla, as a vampire, doesn't have a body that is designed to give birth to a child. Angel doesn't understand why the Powers that Be would give him a baby, a true miracle, only to let it die. Gunn suggests that the baby may not have been sent by the Powers that Be but may be the thing warned of in the prophecies, and the Powers that Be are trying to end what could bring about the apocalypse. Angel refuses to believe that the Powers would just kill his unborn son and leaves to be with Darla.

Angel joins Darla in Lorne's bedroom as she rests, and she tells him she's realized the baby is dying. She laments that she can't even offer her son life. Holtz shows up at Caritas, and since no one else knows who he is, they are not alarmed. Lorne hands him a flyer, and Holtz starts to leave singing the lullaby. Lorne realizes Holtz is going to attack and gets everyone out of the main area as a barrel of gasoline and a grenade fall down the stairs. The grenade goes off, and the ensuing explosion completely destroys the bar.

Running to the back area, it's revealed that Holtz accidentally exposed a loophole in the club's magical protection (the spell prevented violence within the club, whereas Holtz attacked from the outside). As the building begins to crumble, Darla is finally told about Holtz's renewed presence. She recalls all she and Angelus did to hurt the man and becomes wracked with guilt saying, "Doesn't seems so funny now, does it?" Outside the club, Darla collapses in the alleyway, knowing that her child is about to die. While the others run to get the car, Angel and Fred remain behind with Darla. She laments that her son is going to die in an alley, and reminds Angel that he died in an alley and wants to say she is sorry and mean it but knows she can't, just as she knows Angel can never forgive her. She tells him they did so many terrible things together, saying they can never make up for any of it. Admitting that creating life with Angel was the only good thing they ever did together, Darla makes sure Angel will relay that to their child, before picking up a piece of wood and staking herself. Darla crumbles to dust, but her sacrifice has left her baby, alive and crying, behind. Angel picks up his son, overwhelmed with feeling when, at that moment, Holtz appears, armed with a crossbow. Cordelia, Wesley, and Gunn drive up, blocked by Holtz. Angel and Holtz share a moment in which their eyes meet, and he slowly lowers his crossbow. Angel, his son, and Fred carefully make their way to to the car. Sahjhan yells at Holtz for not killing Angel, saying he wasn't doing what he swore he'd do. Holtz responds that he intends to follow his promise, and will show Angel no mercy.