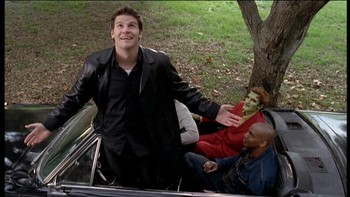 "Can everybody just notice how much fire I'm not on?"

Cordelia finds herself in a new dimension, where she is chased down by a green demon who declares her a "cow", or human slave. She is sold at the market, and her demon owner forces her into a collar that can be used to shock her when she doesn't obey. As she later mucks out the stables, wondering aloud if she can remove the collar, a runaway slave warns her through a hole in a wall that she shouldn't bother fighting. Cordelia is unable to see that the woman is Fred from her vision, crazy after all her years in Pylea. Before any more information can be exchanged, Fred is caught and taken away. Later, Cordelia follows her owner, carrying purchases from the market, until a vision causes her to fall and drop everything. She reveals she saw a villager being attacked by a Drokken in her vision, and a crowd gathers and declares her to be cursed. Cordelia is brought before Constable Narwek and explains she has precognitive visions.

Meanwhile, in Los Angeles, the group realizes Cordelia has been sucked into the Host's home dimension of Pylea, which the Host says he was glad to leave and will never go back to; he also cannot provide information on how to access Pylea from Earth, since his coming from the former to the latter was most unintentional on his part. Caritas, the bar he runs, was once the abandoned building where the portal from Pylea deposited him. Angel, desperate to save Cordelia, reads from the book to reopen the portal, but nothing happens; Wesley's research discovers that portals can only be opened so many time before they become "cold". This means that the gang must find a new hot spot to open the portal. The Host seeks help from a psychic friend in order to find a hot spot, but she won't provide the information until he agrees to go with the others to finish his business in Pylea. Wesley finds out that the portal scatters multiple people who go through, and they realize that Cordelia won't have arrived in Pylea with Landok. Gavin Park, a lawyer from Wolfram & Hart, appears at the hotel with a colleague and informs Angel that the law firm plans to buy the hotel when the current lease expires. Angel, uninterested in dealing with lawyers, vamps out and Gavin takes his leave, but not before promising to make Angel's life difficult. Angel leaves a message on an answering machine for Gunn, who has elected to go reconcile with his old gang, with key information in case they don't make it back from Pylea.

Angel pulls his car up to the gate of Paramount Studios, following the Host's information that it is a psychic hot spot. Wesley's research revealed that if the gang use the car to travel through the portal it should allow them to stay together. Although Gunn had initially stated that George's death made him realize he's needed in this dimension, Angel's distressing phone message persuaded him to join the mission. Wesley reads from the book, and with final good-byes to L.A., Angel drives his car through the portal however the book is left behind. As the car arrives in daytime Pylea, Angel rushes to cover himself before realizing that the two suns are not fatal to vampires. Happy and amazed, Angel goes off to gather branches to hide the car while enjoying the rare opportunity to be in sunlight. After covering the car, the guys realize that the book is gone and Lorne is horrified. Wesley realizes the book must have been bound to Earth, and Angel points out that they can't return home without Cordelia anyway, so finding another way to open a portal will have to wait until after she's rescued.

Meanwhile, Cordelia is taken before a tribunal and tested to see if she is afflicted with a curse. They test her using hot pokers and sharp needles, and unanimously decide that she is indeed cursed and take her away.

In town, the Host advises Wesley, Angel, and Gunn to stay to the shadows, as humans are treated as slaves. He tries to get help from an old friend but is met with a hostile reception, as he is considered to have deserted his people. Chased by villagers, the gang is eventually caught and tied up in the middle of town. They are taken to a dungeon and chained up, and eventually taken to be sentenced to death by the Monarch. Instinctively, they try to escape, but discover that the Monarch is a very contented looking Cordelia wearing a sequinned bikini and many jewels.