Comic Book / Back To The Klondike 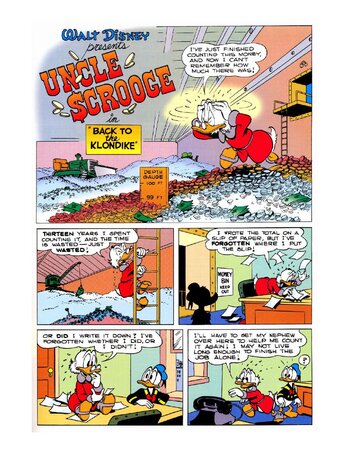 Back to the Klondike is a Disney comic book story created by Carl Barks and published in Dell Comics' Four Color Comics #456.

Scrooge is suffering from memory lapses and Donald convinces him to see a doctor. Scrooge is prescripted some pills supposed to help recover his memory.

Indeed his memory returns, and Scrooge decides to return to the Klondike, the place where he earned his wealth in his youth, and takes Donald and the triplets with him. During their trip, he confesses he left a cargo of gold buried near his old hut, and means to recover it. Scrooge also begins reminiscing of a woman named "Glittering Goldie", a person of his past. Donald and the nephews tease him, convinced she is an Old Flame of his, but Scrooge strongly denies it.

As they arrive in Dawson, they visit the saloon where Scrooge first met. Scrooge tells his nephews how Goldie invited him for an evening, and then drugged his coffee and stole his gold. Scrooge then went in a Roaring Rampage of Revenge kidnapped Goldie and forced her to work for him at his mining claim to learn how hard is to dig gold. He tells also that the second reason he's back to Dawson is that Goldie signed a promissory note to return the stolen money, and with decades of interest she owes him millions of dollars.

They finally reach his old lodge and to their surprise they find it's occupied by someone who shoots on sight any stranger who reaches his property. Scrooge and Donald make several attempts to approach the tenant, but unsuccessfully so. All they manage to find out is that it's a old lady who lives by herself, save from the company of a giant black bear.

Finally the nephews manage to surprise and disarm the old lady behind with a trick. The old lady is none other than Goldie herself. As Scrooge and Goldie meet again, both a rivalry and an attraction to each other seem to resurface. But Scrooge demands that Goldie pays the old debt, which Goldie cannot pay. She gives Scrooge what little jewelry she has left and just leaves, apparently going to an hospice. Scrooge chases after her and challenges her to a contest: the one who can find gold first is going to keep it, and the debt will be cancelled.

Goldie indeed succeeds in finding Scrooge's old cache that is now worth a fortune. Scrooge leaves in furor because he hadn't taken his pills (there's a Running Gag of Scrooge forgetting to take pills to save the money), he had forgotten where the gold was. But Donald is not fooled. He reveals to his nephews that Scrooge had indeed taken the pills, and is keeping a facade because he wanted Goldie to find the gold. In the end, his nephews realize that Scrooge is better than he would like to appear.

Back to the following tropes: