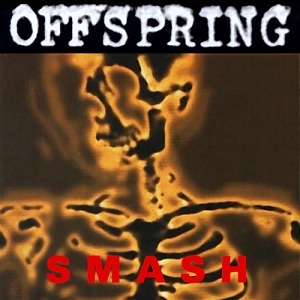 I may be dumb, but I'm not a dweeb
I'm just a sucker who's got no self esteem
Drivers are rude
Such attitudes
But when I show my piece
Complaints cease
Something's odd
I feel like I'm God
You stupid dumbshit goddam motherfucker!
—"Bad Habit"
Advertisement:

Smash is the third album released by American Punk Rock band The Offspring. It was released through Epitath Records on April 8, 1994.

Lead singer Dexter Holland decided to pick up a rhythm guitar for this one. Their recording sessions, which went through the first two months of 1994, would forge an album that, along with Green Day's breakthrough album Dookie, would finally bring punk rock to the mainstream in the United States.

Some critics saw a connection to the then-peaking Alternative Rock movement, with Stephen Thomas Erlewine of AllMusic describing the song "Come Out and Play" as "starting and stopping like Nirvana". He praised the entire album as "relentlessly heavy".

Three singles were released to support the album: "Self Esteem", "Come Out and Play", and "Gotta Get Away". A fourth song, "Bad Habit", was only put on the radio. However, none were actually released commercially, and the rules for the Billboard Hot 100 at the time prevented them from charting. The three singles all hit the Billboard Hot 100 Airplay chart, and were all Top 10 on the Mainstream Rock chart.

HEY! Are you troping back to me?