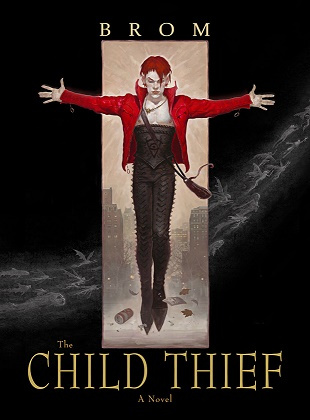 The Child Thief is a 2009 novel by the artist and writer known as Brom.

Fourteen-year-old Nick is in trouble. He's on the run from drug dealers with a pack full of stolen meth, and those drug dealers have caught up. He's pretty sure he's going to die. Until Peter shows up. Peter saves his life and promises to take him away to a magical land full of adventure. And Nick follows, through a haunted mist to a strange, magical, dying land full of Devil children, monsters, magic and danger. There he learns he's not been saved so much as recruited, to fight with Peter and his pack of wild, lost children against the Flesh Eaters who are destroying the land of Avalon. As he and the other New Blood find their place in the group, discovering more of the nature of Avalon and of the threat against it, Peter's past is revealed to the reader.

It's basically a grimmer take on the story of Peter Pan, although there's no mention of any of the other characters in the original book by James Barrie.