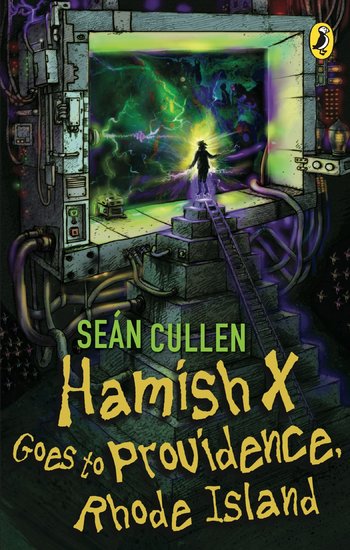 The Hamish X book series is a trilogy of novels written by Canadian stand-up comedian Seán Cullen. It includes books Hamish X and the Cheese Pirates, Hamish X and the Hollow Mountain and Hamish X Goes to Providence Rhode Island.

The title character, Hamish X, is a Hollywood Cyborg (or Ridiculously Human Robot, depending on interpretation) with gold eyes. He's an orphan who was modified by a Men-in-Black-like organization called the Orphan Disposal Agency, or ODA. Of course, he goes on to become their worst enemy when he realizes he's being manipulated.

The series is surprisingly deep and detailed but it also manages to be hilarious; it uses footnotes containing comedic (and often completely made up) definitions and explanations of various events as they progress.

For another series by the same author, written after this one was completed, see Chronicles of the Misplaced Prince.