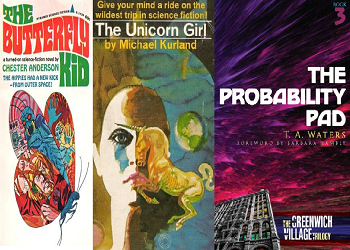 The Greenwich Trilogy is a series of three humorous science fiction novels written by three separate authors, all of whom appear as protagonists of the series. Set in and written during The '60s, the series—especially the first book—was considered somewhat shocking for its positive and reasonably realistic portrayal of the hippie culture of the time.
Advertisement:

The Butterfly Kid was nominated for a Hugo Award in 1968.