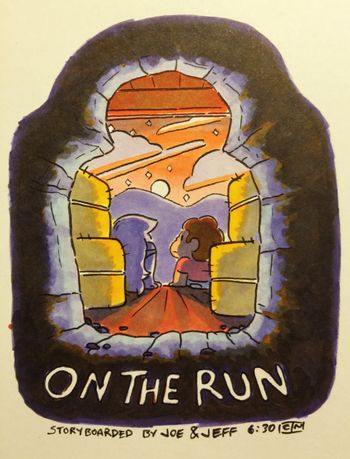 It's time to get moving!

Steven has become engrossed in a book; it's his only entertainment since being grounded from television. He instantly drops it to greet the Gems as they return via warp. They have collected all the deactivated Robonoids that Peridot left behind, and Amethyst playfully smashes one, splattering it everywhere. Pearl scolds her and begins explaining that the Homeworld warp cannot be allowed to become operational again. Garnet assures her that Earth is safe, prompting Steven to ask "safe from what?"

Pearl awkwardly tries to explain, in a too-careful way, that the Gems from the Homeworld had plans for Earth that some gems, like Rose, Garnet, and Pearl, disagreed with; so vehemently that they chose to protect Earth at the cost of never going home. Steven declares the Crystal Gems are just like The No Home Boys, the heroes of his books, and starts to wonder what life on the road would be like. Amethyst urges him to find out. The pair pack up two Bindle Sticks, catch a ride with the cool kids, and hop a freight train, all to the tune of a song. Amethyst's verses seem to be a bit more somber.

On the train, Steven loses his only food to a vicious raccoon and can't sleep on the itchy hay. He declares himself done pretending, but Amethyst says she's not – unlike Steven, she really has no home. She takes Steven off the train to "The Kindergarten," a ruined breeding ground, and explains that she was created here, showing Steven the hole in the rock where she came out of. She giddily describes living here, essentially alone, until Rose, Garnet and Pearl found her.

Pearl arrives via warp pad, scolding Amethyst for running off and for having taken Steven to such a bad place. When she asks Amethyst how much she told Steven, the purple Gem explodes, revealing that the Gems from Homeworld made more gems here, and that the Crystal Gems protect earth from parasites like her.

Pearl tries to stop Amethyst's rant, insisting Steven is not ready to hear what she's saying, but Amethyst is too upset to listen and attacks. Pearl insists she doesn't want to fight, but defends herself. Steven tries to get between them, only to end up literally tossed aside; and for Amethyst, less gently than usual.

Amethyst: I'm not gonna let you stand there and remind me of everything I hate about myself!

Steven jumps between them again, but before they can stop fighting, one of the structures damaged in the fight falls on top of them. Steven conjures his force field, but Amethyst jumps out of its boundaries and runs away.

Once the threat has passed, Steven finds Amethyst huddled with her face to the wall in the hole she described coming from. He tries to talk to her, but she brushes him off, saying she's bad and he shouldn't want anything to do with her. Steven insists Pearl talk to Amethyst. After a rough start that threatens to make things worse, Pearl gets through to Amethyst after realizing how much pain she was in.

The trio return home, Steven looking forward to sleeping in a bed. After they warp away, ominous shadows fall on the now-deserted Kindergarten.