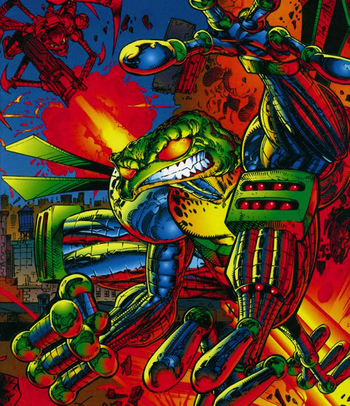 Created by Ethan Van Sciver, Cyberfrog is an independent comic book series telling the adventures on Earth of an anthropomorphic, sentient frog with mutant superpowers.

It originally appeared in 1994 published by Hall of Heroes comics. Cyberfrog appeared irregularly until around 1999, when Van Sciver put the series on indefinite hiatus after finally getting steadier and more lucrative work as an artist for DC and Marvel Comics.

In 2018, fresh out of DC Comics, the author decided to resurrect Cyberfrog as a crowdfunding project in a multi-part series with the first being titled Cyberfrog: Blood Honey, which for a while held the record for a successfully crowd-funded comic book. After several delays it was finally distributed to the project’s backers by late 2019.