A list of characters from the comic strip Pearls Before Swine.

The main character; a very cynical rat who is critical of the strip's work and often schemes to get a quick buck. He believes himself to be utterly superior to everyone around him and constantly antagonizes and trolls everyone around him. 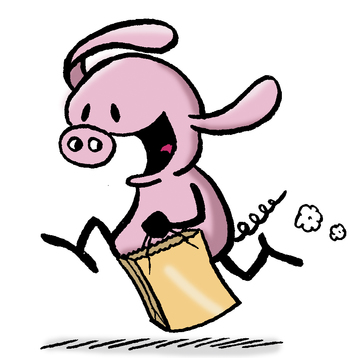 The second most important character of the strip and Rat's roommate: a good-natured, yet naive and dimwitted anthropomorphic pig who lives with Rat.
Goat 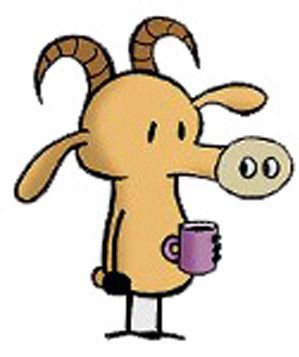 A goat who lives near Pig and Rat. He is much more intelligent than both of them, but his intelligence is usually not acknowledged by either of them.
Zebra

A friend of Pig, Rat, and Goat. He's also quite intelligent and also very kind and gentle. At first, he was seen patching relations long-distance with his relatives back home and a pride of lions. Later, he primarily tries to avoid the schemes of the crocodile fraternity Zeeba Zeeba Eata.
Zeeba Zeeba Eata/ The Crocs
A fraternity of crocodiles whose fraternity house is next door to Zebra. Their primary goal is to kill and eat Zebra, but due to their stupidity, they are unable to accomplish this.
Larry 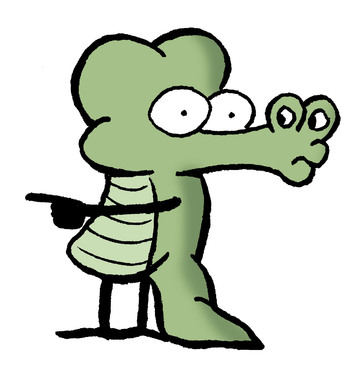 A member of Zeeba Zeeba Eata, Larry lives in the house behind Zebra's and is even dumber than his fellow Crocs, though not by much. He also has a wife, Patty, and a son, Junior.

Patty
Larry's wife and Junior's mother. Puts up with a lot from Larry and is constantly disappointed in him.
Junior

Larry and Patty's son. He tries not to be like the rest of his race and is not only friends with Zebra but a vegetarian. He has a zebra girlfriend named Joy, who happens to be Zebra's niece. Larry and Patty are not happy about any of this. 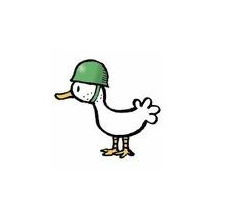 Pig's, well, Guard Duck that he bought when he and Rat couldn't afford a guard dog. He is highly paranoid and his first solution to most problems is to shoot like the dickens. He occasionally works as a soldier of fortune and is usually off on his own adventures separate from the group these days.
Stephan Pastis
The creator of the strip. Frequently visits, or is visited by, Rat, to his never-ending frustration. 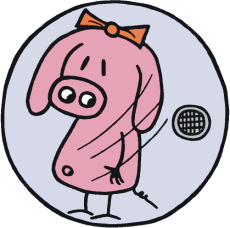 Pig's sister and the love of Rat's life. More like the one that got away.
Pigita

Pig's on-and-off girlfriend of many years. She is constantly frustrated with his immaturity.
Snuffles

A cat that the Crocs bought to maim Zebra, but who ended up as Zebra's pet. Does shady activities including terrorism, selling stolen watches, and running a gambling ring. Also Guard Duck's best friend.

Maura
A non-anthropomorphic duck and the love of Guard Duck's life. Left him to go south for the winter and later came back for him, only to leave him again to be a spokesduck for Aflac.
Alphonse
A suicidal porcupine, though he mainly plans it for attention.
Annie May
Pig's arch enemy who's also a sea anemone.
Leonard
A man who worked at an amusement park. Wore his costume all the time and moved in with Rat and Pig. Was eventually killed off.
Wee Bear
A young bear and social activist.
Chuckie the Non-Anthropomorphic Sheep
A sheep. That's about it.
Miss Bootyworth
A syrup bottle that Pig fell in love with until Pigita and Rat killed her.
Toby The Agoraphobic Turtle
A turtle who never leaves his shell. Drinks from a beer bong into it.
Angry Bob
A fictional character created by Rat. Dies at the end of almost every story, often in bizarre and unlikely ways.
Andy
A dog tied up to a chain in his owner's backyard, but that doesn't stop him from trying to follow his dreams. Not anymore, it would seem.

The Killer Whale
A killer whale who tried to trick a family of seals by befriending them so he could eat them. Eventually died, but later "un-died".
Jeffy
From The Family Circus
Controlling Connie
A girl rat dated. Very very controlling.
Christmas Tree Girl
A girl who sells Christmas trees and occasinally dates Rat.
Connie The Judgmental Cow
A cow that shouts insults from a distance.
Hobart
A train conductor for toy trains. Got laid off, then had his wife leave him and things just kept getting worse from there.
Dickie the Cockroach
A comic strip character created by Rat that came to life. Kidnaps people who he dosen't like.
Danny Donkey
A children's book character created by Rat. Like to drink to forget his problems.
Ellie the Elephant
Another one of Rat's creations, Ellie is an elephant that has a terribly thoughtless boyfriend, Henry the Hippo.
Max and Zach
A pair of Lions who live next door to Zebra. Despite being Zebra's predators, they are actually on quite good terms with him since their wives do all the hunting and even warn him when their wives sense weakness in Zebra.
Licensable Bippy
A character that Stephan created to grab a quick buck. He is described by his creator as bland, big-eyed, and smiling.
The Lemmings
A group of lemmings, always standing on top of each other in a group of four, who plan to leap off their cliff to their deaths. Often, however, they will do silly things prior to this, diminishing the impact of said deaths. Even away from the cliff, they will always stand on top of each other, even on a date.
The Penguins
A group of penguins — including Moe and Saul — living on a tiny ice shelf in the South Pole. Originally their strips involved a polar bear trying to eat them, then we saw them struggling to tell their wives apart. To escape from the polar bear, they got adopted by the Crocs, who thought they were Oreos due to their colour scheme.
Neighbor Bob