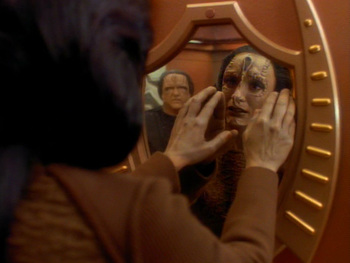 Gather the kids, get your popcorn, and enjoy a good, solid hour of gaslighting.
While on the way to go anti-grav sailing in the holosuites with Dax, Kira receives a communication from Bajoran scholar Alenis Grem requesting information on Elemspur prison. Kira is puzzled as to why she was approached since she was never there but Alenis claims that there are records of her being held in Elemspur during the Occupation and sends a mugshot as proof.
Advertisement:

Kira is shocked since she spent that period of time hiding from the Cardassians in caves during a harsh winter, so she remembers it quite well. At Odo's advice, she contacts her last surviving "cellmate", a Bajoran named Yeln. Much to Kira's surprise, Yeln recognizes her, claiming he thought she was dead after she was dragged away from her cell. Faced with records and witnesses disagreeing with her memories, she decides to go Bajor to get to the bottom of this, with Sisko's blessing. Unknownst to Kira, she is being followed by a mysterious woman.

Some time later, Sisko and Dax are contacted by Alenis who claims that Kira never arrived to meet her and apparently vanished shortly after leaving the spaceport on Bajor. An unconscious Kira is seen awakened by the woman from earlier. Kira looks at a mirror and to her horror she sees she is now a Cardassian!

Accompanying the woman is a Cardassian named Entek who explains she is "home" in Cardassia. Kira naturally believes this to be some sort of set up and vows to tell them nothing but Entek insists he is trying to help her. Entek claims she is not Kira Nerys but rather an undercover operative of the Obsidian Order named Iliana Ghemor, and he is her former trainer. Ten years ago, Iliana volunteered to infiltrate the Bajoran Resistance so the Order kidnapped the real Kira Nerys, surgically altered Iliana to look like her, implanted Kira's memories onto her and sent her back to the Resistance. The room she is held in is not a prison but her father's house. Entek gives Kira a data rod containing a personal statement from Illiana as further proof but Kira refuses to watch it.

Entek "introduces" Kira to Legate Tekeny Ghemor, "her" father. Kira treats him with hostility since her father died fighting the Cardassians. Entek explains to Ghemor that "Iliana's" memories haven't surfaced yet and Ghemor claims that until they do, she is a guest in his home. Ghemor treats Kira warmly, replicating her Bajoran food and assuring her that as a member of Central Command, he can have the Obsidian Order surveillance devices disabled. He apologizes for not having convinced her from going on the mission but she was so determined to serve Cardassia. Kira still believes none of this.

Back on Deep Space 9, Garak reports to Sisko and the crew that a "friend" of his informed him that Kira is being held by the Obsidian Order. Sisko decides to mount a rescue mission, which Garak claims is utterly impossible. Sisko then press gangs Garak into coming along by pointing out that the Bajoran government wants Garak off the station (which would leave him with nowhere safe to go), but Sisko doesn't plan to do that ... yet. Garak begrudgingly accepts.

A couple of days later, Kira still doesn't "remember" anything, despite receiving injections that would supposedly restore her original memories. Entek starts getting more aggressive and attempts to pump Kira for information on Deep Space 9. Kira remains evasive prompting Entek to show further evidence of his claims: he brings out the cryogenically preserved corpse of Kira Nerys (which Kira naturally dismisses as a fake) as well as telling her about a memory of accidentally shooting a mother hara cat which she had never told anyone about, claiming it's a memory he implanted himself. Entek warns Kira that the Order is losing patience with her.

Kira attempts to escape by disabling the window's force field but Ghemor enters claiming that she set off a silent alarm. He also points out that even if she does escape, there's no way she can leave the planet without the Order finding her. Ghemor vows that no one will hurt her and begs Kira to watch the recording Entek gave her. Kira does so and is shocked to see that Iliana looks and sounds exactly like her.

Meanwhile; Sisko, Dax, Odo and Garak are deep into Cardassian space on the Defiant disguised as a Kobheerian freighter. They nearly get their cover blown by a Cardassian Gul demanding them to be stopped and searched but Garak orders him to leave and erase his logs with a complex military code he heard while hemming some trousers.

Entek once again interrogates Kira, who at this point is almost broken and unsure of what to believe. Ghemor orders this to stop and Entek replies that their next interrogation will be at Order headquarters. Ghemor tells Kira that he will help her escape since even if she no longer remembers him, he still loves her.

Ghemor later gives Kira her "mother's" bracelet and introduces her to Ari, who will help her escape the planet. Kira asks how this is possible and they explain that they have friends who think as they do that the Central Command and the Obsidian Order have too much power, which they aim to change. Kira realizes that Ari and Ghemor are part of the Cardassian dissident movement. Ari urges Kira to come along but she cannot believe this is a coincidence...and it hits her: Ghemor is the real target of this charade. The Order exploited Kira's resemblance to Iliana to set up this whole thing in order to expose Ghemor's ties to the dissidents. Kira's suspicions are confirmed when Entek shows up with two armed guards, shoots Ari and gloats that he has exposed a traitor and is about to destroy the dissident movement. Luckily Odo, Garak and Sisko show up in the nick of time and disarm the guards. Entek recognizes Garak and taunts him that until now the Order was willing to let him live his exile in peace but no longer. Entek then tries to draw a hidden weapon but Garak kills him.

Garak: A pity. I rather liked him.

Back on Deep Space 9, Kira is Bajoran again and tells Ghemor that Bashir confirmed that all the alterations were surgical and that she is indeed Bajoran. Yeln has gone missing, meaning he was likely a Cardassian agent. Kira asks why go to all the trouble of kidnapping her instead of getting the real Iliana and Ghemor points out that then her memories would return and thus Ghemor wouldn't needed to save her and expose himself. Ghemor still believes Iliana is alive and hopes to find her. The Mathenite government has given Ghemor sanctuary but before he leaves, he gives Kira some "fatherly advice": never trust Garak. He also tells her to keep the bracelet since until Iliana is found, Kira is now the closest thing he has to family. Kira sends him off saying that despite anything she has previously said, that he is an honorable man and his daughter must have loved him very much.