Webcomic / When I Woke Up I Became A Bagel Girl 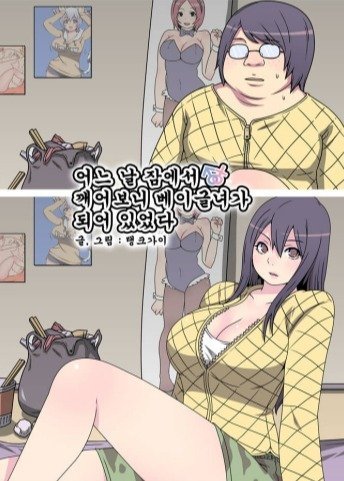 Above: Bong Gi, Below: him after the transformation
Advertisement:

Jeong Bong Gi used to have dreams of making something of his life. But now all that seems like a distant memory.

He has become fat, lazy, unemployed, and altogether unlovable. In the real world, people are grossed out by him. He has never had a girlfriend and he spends his late nights fantasizing about women whose pictures he leers at on the internet.

His own life appalls him, but he has one escape – his online life. Gaming has become his everything, and he excels at it.

After another long, lonely night of gaming, he wakes up – and is shocked to find that he has transformed into a woman. Or to be more precise, a woman who looks a lot like those he used to lust after online!

Confused, he does not know where to turn – so looks for answers on the net.

He encounters a young woman in a chat forum named Han Sae Mi, who offers him advice. He soon falls for her charms – which makes things complicated to say the least.

And things get even more bizarre when he attempts to take revenge on Sang Woo, a school bully who turns out to be Sae Mi’s older brother!

“Bagel Girl” is a 2019 animated South Korean series based on a web-hosted cartoon strip by Tank Guy.

An anime adaptation by Studio Animal was released on 2019, spanning up to 15 14-minute episodes.

The Original webcomic can be read here

Both provide examples of: