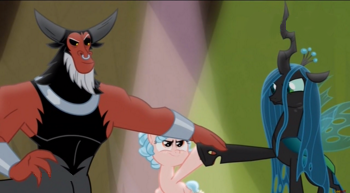 A better way to be bad.
I think I know a way that we can grow.
Time to try something new, something better.
No more solo, trust is the way to go.
And all we need to do is work together.
— Cozy Glow (during the song)
Written by Michael Vogel
Advertisement:

Grogar continues to plot against Twilight Sparkle, but the bickering between Cozy Glow, Tirek, and Chrysalis, each trying to establish their superiority over the others, continues to annoy him. He demands that they are going to have to work together to succeed. The three attempt to live together, Cozy Glow being the facilitator of trying to bring them to be friends. But even after Cozy's attempts, the three continue to bicker about who is the best villain. Impatient of their rivalry, Grogar orders the three of them to recover his bell, stolen by Gusty the Great and hidden atop Mount Everhoof, a high mountain surrounded by high winds, across a wide gorge, and further protected by a strong magic field. He insists the three of them work together to get the bell.

As soon as they arrive, the three split off. Chrysalis uses her changeling abilities to mimic several creatures that get her to the top, but she cannot even fly across the gorge without being pushed back by winds. Cozy Glow takes a more direct route up the mountain and discovers a lone guard named Rusty Bucket who prevents anyone from crossing his path. Cozy tries to get around several times, but Rusty is two steps ahead and blocks Cozy's path each time. Tirek simply sets up a small camp at the base of the mountain and laughs in jest when both Cozy and Chrysalis come back with no success, knowing that there was no way for them to reach the bell in the first place.

As they regroup, they recount their various encounters with Twilight and her friends and find they have a common bond of hatred over Twilight. Realizing they have a common bond to trust each other a bit, they work together to ascend Everhoof. They bypass Rusty Bucket by starting a small avalanche that covers him. To get across the gorge, Chrysalis turns into a roc and throws Cozy to the far side, where she ties off a rope for the others. To get past the magic field, Chrysalis allows Tirek to drain her magic so he can open a small-enough hole in the field for Cozy to pass through and get the bell. With their success, they still eschew the idea of being "friends" but realize by working together they can achieve great victories. They consider what to do with Grogar's bell.

The three return to Grogar, and lie about the bell not being where he said it was. Grogar is upset to find the bell gone but glad to have seen the three work together. Deep in the other villain's chambers, the bell is hidden away, starting to glow.

Example of:
Even Bad Men Love Their Mamas