Web Video / Just Between Us 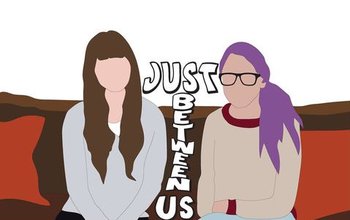 Allison: We have a sound guy now because we’re blowing up all over the web.
Gaby: And I’m blowing something else. Welcome to the show.
Allison: [sighing] …I just lob it up...and she puts it in her vagina.
— “How Do You Know If Someone Likes You?”

is a weekly pseudo-love/relationship advice show on YouTube created by and starring comedians Allison Raskin and Gaby Dunn, frequently seen in BuzzFeed videos.

Each week the two take on a "viewer" question in a short clip. In the beginning, Raskin wrote the questions but since the show's popularity increased, some actual audience-submitted questions have been used. The show is loosely scripted, so the two leads play exaggerated versions of themselves — Raskin as a perky Pollyanna and Dunn as a loud Ethical Slut, and they answer the question while occasionally pretending to break character, bicker and make up, or wander off onto tangents.

Despite being a humor show, they frequently give serious advice about the topic of the week. They occasionally have guest stars from other YouTube channels. They also release one sketch video a week. Find it here

Just Between Us contains examples of: