Literature / The Road to Mars 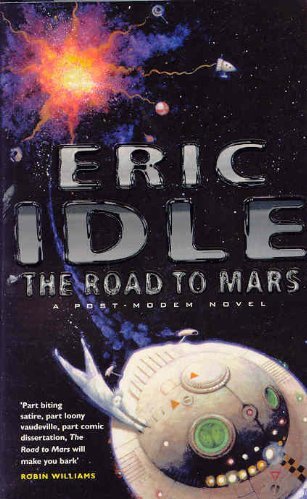 The Road to Mars: A Post-Modem Novel is a comedic Science Fiction thriller by Eric Idle. (Yes, that Eric Idle.) It's a story about comedy and fame and the lives of working comedians. Set in space apparently just to mess with our heads.

Muscroft and Ashby are a pair of not-very-well-known comedians, currently working the "Road to Mars", a term for the great empty spaces past the orbit of Mars, where the sparsely scattered population is starved for entertainment. They are accompanied by their robot, Carlton, who was built to look exactly like David Bowie. Carlton is, though they don't know it, obsessed with becoming the first AI to understand comedy, and is studying the pair even as he serves them.

Luck strikes, and Muscroft and Ashby get offered a regular gig on an interplanetary cruise ship, The Princess Di. It's not quite the same as being discovered, but it's a good first step. Unfortunately, the gig means working in close proximity to the unpleasant diva, Brenda Woolley, a singer trying desperately to deny the ravages of age. Even more unfortunately, the ship is being targeted by terrorists.

The whole story is told through the framing device of a future researcher who has recently discovered Carlton's long-lost published analysis of the nature of comedy, thinks it's brilliant, and is hoping to leverage it for his own fame.