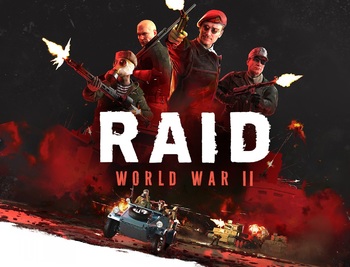 World War II is in full swing and things aren't looking good. Those Wacky Nazis are out in force and the Allies are worried. In desperation, they look to a group of four prisoners of war: Sterling, Kurgan, Rivet and Wolfgang, to push back against the Nazis. Since they're not officially Army, MI6 has thought of a way to properly motivate them: while they're on mission, if they so happen to find any Nazi gold or other valuables... well, let's just say nobody's going to be looking very hard to find out where it went.

Does any of this sound familiar? Funny you should say that...

RAID: World War II is a 4-player co-op First-Person Shooter developed by Lion Game Lion, a band of OVERKILL alums, with similar gameplay and the same engine as the above-mentioned game, with weapon upgrades obtained via completing goals, as opposed to simply buying them. The players are also encouraged to look for dog tags and pocket as much treasure as possible before exiting the level. The better the players are at finding the goodies stashed around the level, the better their reward at the end will be.

The game received an update

three years later on July 12th, 2022 to largely maintain compatibility with newer intel CPU's and Windows 11, as well as opening the floodgates for custom content such as custom levels and custom weapons.