WARNING: This fangame is made with the assumption that players have already experienced Undertale, so spoilers relating to backstory in that game will be unmarked. 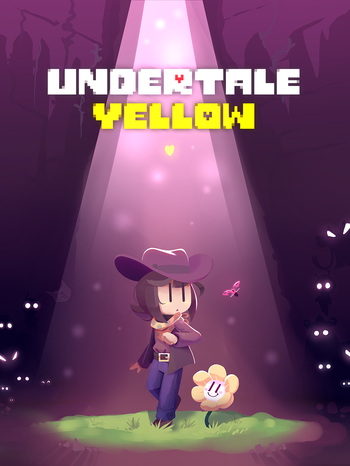 Don't do Genocide, kids.
Before the seventh, there was the sixth.
Advertisement:

Undertale Yellow is an in-progress fan prequel to Undertale.

Set some time after the human-monster war, the story focuses on Clover, a human child and the source of the original game's Yellow SOUL. When several humans mysteriously start going missing while travelling to Mt. Ebott, Clover decides to jump into the Underground themself to look for them. Their adventure has both new and familiar faces.

Announced only a few months after the release of the original game, the project started on February 4, 2016 after Toby Fox allowed it to be greenlit. While the full game isn't out, a demo

has been made available on Gamejolt since March of the same year.