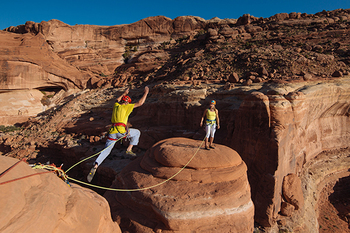 Just Don't Look Down.
Also known as America Wild: National Parks Adventure, a 43-minute IMAX 3D documentary on the U.S. national parks shown mainly in museums. Narrated by Robert Redford, it follows three extreme-sports enthusiasts — Conrad, Max and Rachel — on a road trip to such parks as Yellowstone, Devil's Tower, Redwoods, and Zion, intercut with the story of how the national-park system was created by Theodore Roosevelt under the influence of John Muir.