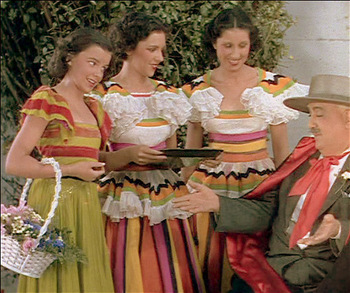 That's Judy on the left, singing about marijuana.
Advertisement:

It was produced and narrated by Pete Smith as one of his Pete Smith Specialties. This one is purportedly a film of the annual "Old Spanish Days

" festival in Santa Barbara, but in reality it appears to be a purely Hollywood production. Pete Smith, as narrator, introduces several acts. Andy Devine and none other than Buster Keaton have an extended comic sketch in which Devine fights a "bull" that's actually two people in a silly bull costume. Joe Morrison the singing cowboy sings a song, Maria Gambarelli the ballerina dances, and there are other songs and comedy bits.

This short is best remembered for featuring a 13-year-old Judy Garland singing "La Cucaracha" with her two sisters, who at that time performed together as The Garland Sisters. It also features a shocking number of cameos from MGM stars of the day.