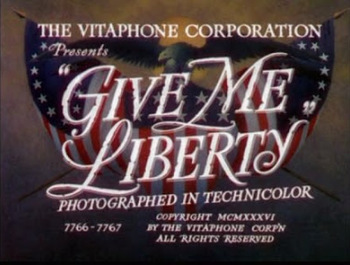 Give Me Liberty is a 1936 short film directed by B. Reeves Eason.

It's about Patrick Henry, Virginia politician and advocate for American independence from Britain, and his immortal "Give me liberty, or give me death" speech of March 23, 1775. The time frame is shortly before the outbreak of open war, but tensions are high in Virginia as in the rest of the colonies. Henry is well known as an opponent of Britain and it's policies in America. At a party he's hosting, one guest sings a pro-independence song, and is promptly arrested by a British goon squad. His wife Doxie, petrified that he will get clapped in a British prison, begs him to dial down his rabble-rousing rhetoric. This proves problematic when the Virginia legislature starts debating a measure to arm a militia for an anticipated war against England.

One of several Technicolor shorts shot by Warners in the 1930s as the studio was testing out Technicolor production before going into features.