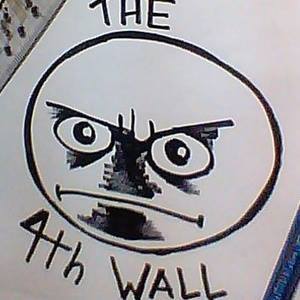 The Fourth Wall is a gag-per-day meta webcomic about, well, Breaking the Fourth Wall, produced by Black Manta Studios and hosted on Tapastic.com.

It stars volatile and swearing-prone cynic Ric, a disgruntled character with an intense fascination toward the real world, and his calmer and (relatively) normal friend, Greg, whose major role is to act as the Straight Man to Ric's many metafiction-related flights of fancy. They are also often joined by a growing roster of bizarre characters in their hijinks, including the mustached Anthropomorphic Personification of the author's own procrastination, the author's very literal Writer's Block, the wandering soul of a dead cat lover, and yes, even the Creator himself.

Sometimes crosses over with its sister comic, Kurumi's After Hours, also by the same team, but by a different artist.

The Fourth Wall can be read here.