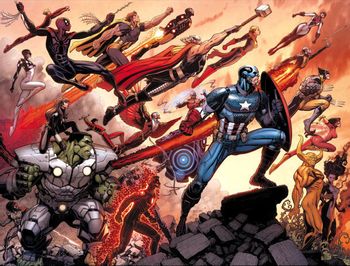 An extended four year run in the Avengers titles written by Jonathan Hickman, told in two series, Avengers, and New Avengers. Beginning in 2012 with the Marvel NOW! initiative, and ending with Secret Wars (2015) in Summer 2015, while also picking up and serving as a sequel to Hickman's run on Fantastic Four which preceded and overlapped with this.

Jonathan Hickman would later return to Marvel years later with a new run on X-Men, which is set to utilize the same amount of ambition as this series to revitalize one of Marvel's other signature teams.