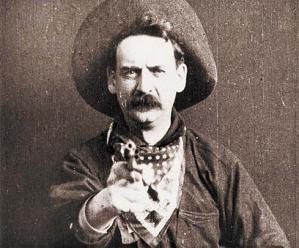 Shooting the audience half a century before James Bond.
Advertisement:

An early film Western, made in 1903 by Edwin S. Porter for Thomas Edison's production company. It depicts a group of criminals robbing a train and its passengers, escaping in the uncoupled locomotive, and then being pursued and killed by a posse recruited from a local dance hall. Apart from the title card and the famous shot of an outlaw firing at the audience, the film consists of thirteen shots, taking place in three interior and a variety of exterior locations. There are no intertitles.

It was one of the longest narrative films yet produced at the time,note 740 feet, or about 12 minutes when projected at 16 fps and contains early uses of what would come to be standard cinematic techniques: composite editing (via multiple exposure), location shooting, intercutting between simultaneously-occurring scenes, cutting within the same scene to compress time, and camera movement.

This film is in the public domain, and may be viewed at YouTube

Not to be confused with the 1975 Michael Crichton novel of the same title, the 1978 film based on Crichton's novel, or other Similarly Named Works.