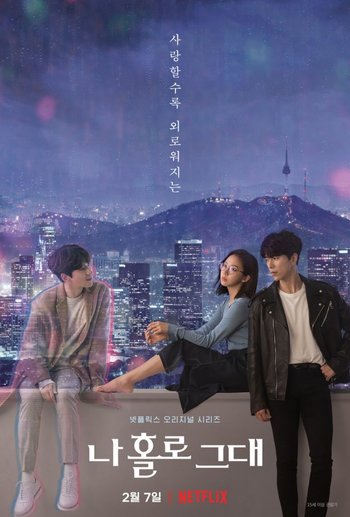 My Holo Love (sometimes known as Me Alone and You) is a Korean Netflix Original released worldwide in February 2020.

Han Seo-yeon is a shy and lonely 30-year-old suffering from prosopagnosia (inability to recognize faces) who works at an optical company in Seoul. One day she mysteriously comes into possession of a strange pair of glasses. Trying them on, she has the shock of her life when a man appears whom only she can perceive — Holo, the world's most advanced AI, who's here to help her and make her happy! Seo-yeon's life soon experiences new excitement with Holo introduced into it, on both the professional and the romantic front. However, she also gets involved with Gio Lab, the company behind Holo, and its mysterious founder, Ko Nan-do — who happens to look exactly like Holo, and may have more of a connection to Seo-yeons past, and more of an influence on her future, than she ever thought possible.

The series has been noted as checking a lot of boxes where K-Drama tropes are concerned — childhood trauma, amnesia, long-lost childhood friends, missing moms, you name it. However, the overarching storyline itself is rather more innovative, and the romantic entanglements may even end on a surprise or two.

My Holo Love starrs Ko Sung-hee as Han Seo-yeon and Yoon Hyun-min in the double roles of Holo and Ko Nan-do.

My Holo Love provides examples of: