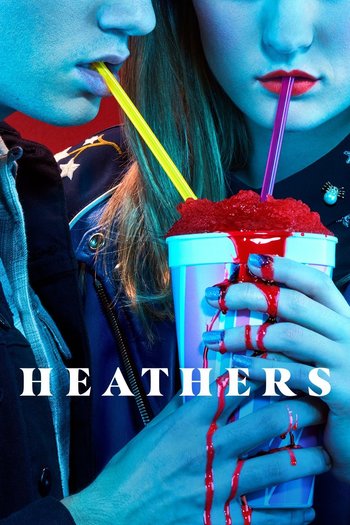 Heathers is an American black comedy television series based on the film of the same name written by Daniel Waters. The first season, consisting of nine episodes (out of the original ten produced), aired on the Paramount Network in 2018. The show is described as an "hour-long pitch-black comedy anthology set in the present day, as heroine Veronica Sawyer deals with a very different but equally vicious group of Heathers."

Unlike the original movie, which was set in the 1980s and featured the then-standard high school hierarchy of jocks and cheerleaders dominating and bullying everyone else, this 2010s version involves a trio of traditionally unpopular categories of students as the hegemons in the student body's competition for social media clout.

Due to the subject matter involving teen violence and murder, the show's premiere was delayed after the February 2018 Florida school shooting; it was officially cancelled after the Santa Fe shooting. Because the first season was already filmed, Viacom (owner of Paramount Network) reportedly looked for another avenue to air it but given the subject matter, other channels and broadcasters did not chomp at the bit to air it. This ultimately led to Paramount Network deciding to air the series after all, airing two episodes a night for five nights straight from October 25 through October 29, 2018.

It is also available in Australia on the streaming distributor Stan.