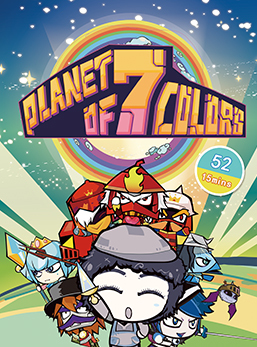 Planet of 7 Colors (七色战记) is a 2009 Chinese animated series by Creative Power Entertaining. It had one season consisting of 52 episodes.

The Dark Planet survives by moving around and eating other planets. A Rainbow Planet with the seven colors of the rainbow has a colorful protective dome that prevents it from danger. Seven kingdoms on this planet attack each other in an attempt to get power and glory, but by doing so, they accidentally weaken the planet's protective dome. Dark Planet's king, King Blackhole, wants the Rainbow Planet, so he sends his son Zebra Prince into the planet to destroy the balance between the seven colors. As the war of Rainbow Planet continues on, one honest man named Fredo stands up for what's right and aims to bring peace to the Rainbow Planet and unite everyone against the Dark Planet.

Planet of 7 Colors provides examples of: