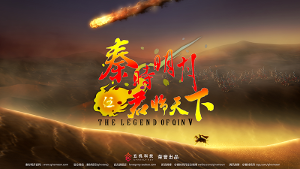 Qin's Moon (秦时明月; pinyin: Qín Shí Míng Yuè, meaning: The Bright Moon of the Qin Era; also called The Legend of Qin) is a Chinese CGI anime of the Wuxia fantasy genre created by Star Q, it began airing in Chinese New Year of 2007. It's based on a series of novels by Wen Shi Ren. The novels have also been adapted into two live-action series (The Legend of Qin and The King's Woman) and an animated film (The Legend of Qin 3D: Ancient Dragon Spirit).
Advertisement:

The story is set during the Qin Dynasty, and follows the adventures of a young boy named Jing Tian Ming and his protector, the master swordsman Ge Nie. As they travel, they come across and become companions to the Mohists. The Qin Empire hires Ge Nie's arch-nemesis Wei Zhuang to hunt them down. The first season featured 10 episodes, the second 18, the third 34, the fourth (depending on which version you watch) 37 or 38, and the fifth 75. Each season gets longer and goes through significant Art Evolution, and there will be at least seven seasons. Qin's Moon also has a Super-Deformed Spin-Off series, several Manhua adaptations, 3 OVAS, a Movie, a web game, and two mobile RPGs. In March 2016, a prequel series of Nine Songs of the Moving Heavens has started airing on a bi-weekly schedule.

Qin's Moon has drawn connections to popular Japanese animation such as Naruto, as well as wuxia films such as Hero (2002) and the House of Flying Daggers. The series has most recently reached its fifth season, but has yet to be licensed or released outside of China.

The series was temporarily on Crunchyroll at 2011 before being taken down. However it's still available at Tudou and Youku; and a fan-subbed version can be found on Youtube. Season 5 is currently being subbed by a different group of fans and can also be found on Youtube.