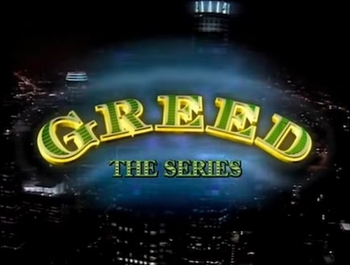 "Welcome to the richest, most dangerous game in America."
Chuck Woolery at the start of each show.
Advertisement:

FOX's (first) answer to ABC's Who Wants to Be a Millionaire? Created and produced by Dick Clark, and hosted by Chuck Woolery, it was known for being very confusing.

There are also opportunities to get rid of teammates in the form of Quick Draw questions, which can be a good idea if you're successful as you get the other player's would-be share of the money, if your team ends up with any money, that is. Also, to sweeten the pot, the randomly chosen challenger, if they choose to duel with someone else, gets a good deal of free money that they leave with no matter what happens, so almost everyone did so.

People rarely voluntarily pulled out early in this game, but they frequently wiped out. Although lasting just one season in primetime, you can find it in reruns on GSN.