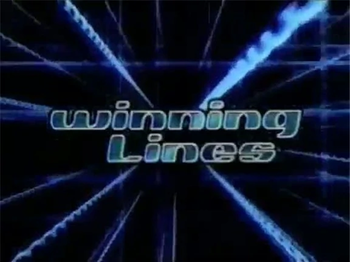 A BBC game show from the creators of Who Wants to Be a Millionaire?, produced as a tie-in with the British National Lottery. The game started with 49 numbered players (the Lotto draw which aired during the show had 49 balls), who played an elimination game based on questions with numerical answers. If a contestant thought their number was the answer to the question asked, they could buzz in. The player with the correct answer advanced to the next round, but only if they buzzed in. Those who guessed incorrectly were eliminated. (Starting from the second series, each player had a keypad to answer general numerical questions; the fastest player to answer correctly would advance.) This process continued until 6 players remained/qualified. Viewers whose telephone numbers contained all 6 of the "ones" digits of the advancing players could register to become a contestant on a future episode too.
Advertisement:

Then came the next round, "Looking After Number One", where the field would be reduced to one player. A question was asked on the buzzer whose answer was one of the numbers of the remaining players. If a contestant answered correctly, the contestant with that number would be eliminated. If the player with the matching number guesses correctly, they're saved. Wrong answers eliminated the person who guessed. This was repeated until one remained.

The winner got to ceremonially start the Lotto drawing, and then play the Wonderwall bonus round for a chance to win progressively better trips (ranging from a bed and breakfast at Spaghetti Junction to a trip "around the world") by answering questions with one of 49 answers on a giant video screen in three minutes. They had to give both an answer and its number in order to move on, and could take two 15-second "pit stops" to study the board again if needed. Twenty correct answers were needed to win the top prize.

Winning Lines ran for six series on BBC One, hosted by Simon Mayo from 1999-2000, and Phillip Schofield from 2001-04. During Schofield's time as host, the winner was given a chance to play a second round of Wonderwall to win up to £5,000 in spending money for their trip.

To cash in on a recent fixation with primetime, high-stakes game shows triggered by Millionaire in the United States, Winning Lines came stateside in 2000, produced by Stone-Stanley Entertainment for CBS, with the hosting role filled by veteran television personality (and game show host) Dick Clark. The show was a faithful adaptation nonetheless, sans Lottery cross-promotion, but with a lottery-sized grand prize of $1,000,000.