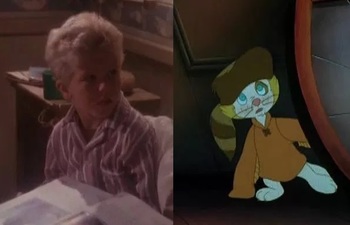 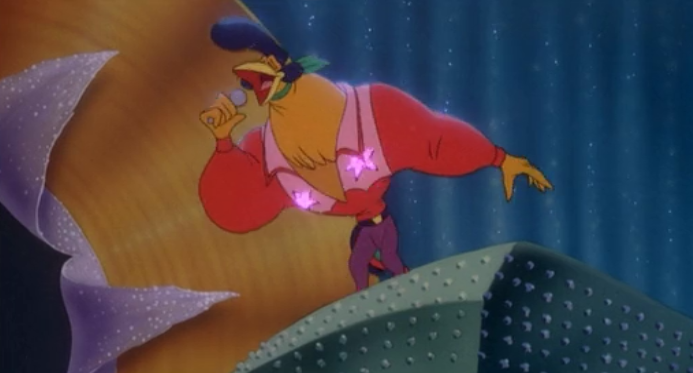 "Well, my daddy taught me how to sing. And that's why this voice means everything."

A rooster whose job it is to crow so the sun knows to come up. Then one day he forgets to crow, and the sun rises without him. His so-called friends mock him and declare him a fraud, which causes him to leave the farm. Some time later, he gets a job in the city as an Elvis-esque performer and gets hundreds of adoring fans. Then he starts to feel lonely, so Goldie (after being convinced by her boss Pinky) decides to remedy that for him. Later, she reveals that she was lying after she truly fell in love with him and hid a note from his friends telling him that they were sorry. This prompts him to come back to the farm, which was flooded due to an eternal rain. He can't seem to remember how to crow at that point, but at the most desperate hour, he crows and brings the sunshine back. He also has kids with Goldie in the end. 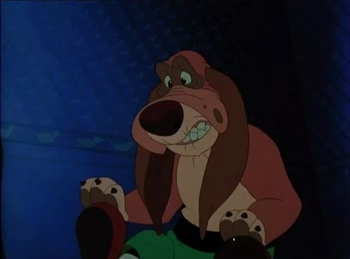 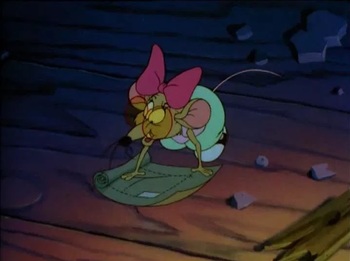 A rather rude and abrasive but ultimately very intelligent, resourceful, kind, and loyal mouse who gives Edmond a hard time about being a cat, but always comes through when he (and the gang) need it.
Voiced by: Sandy Duncan (English), María Fernanda Morales (Latin American Spanish), Kazue Komiya (Japanese), Pia Borgli (Norwegian)
Snipes 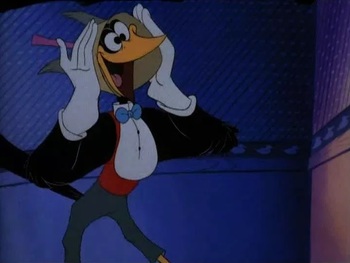 A rather rude, condescending, and food-obsessed magpie who's thrilled to go find Chanticleer since it means he can enjoy the sights (and food!) of the city.
Voiced by: Eddie Deezen (English), Raul Aldana (Latin American Spanish), Kenyuu Horiuchi (Japanese), Jan Einar Johnsen (Norwegian)
Goldie 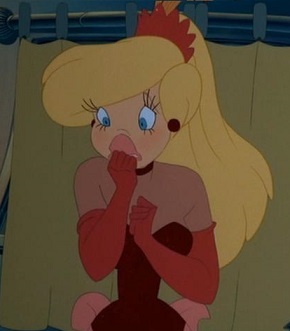 "Love has said 'hello.' You don't know what that means, really means to me."

A showgirl pheasant who was initially jealous of Chanticleer's recognition. Her boss, Pinky, decided to use her to distract Chanticleer from his desire to go back to his farm and she went along with it at first. However, as Patou told us beforehand, besides being smarter and nicer than she originally projected herself as, she also fell in love with Chanticleer for real and ended up revealing to him the note from his friends she swiped the night they first met along with living on the farm with him during the end. 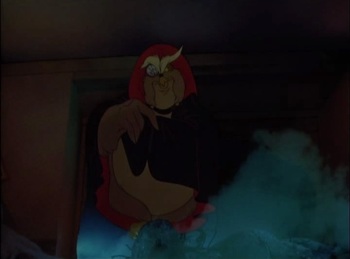 The main villain of the movie, a sun hating owl who drives Chanticleer away from the farm so he wouldn't bring the sun up anymore, and tries to keep the darkness forever. 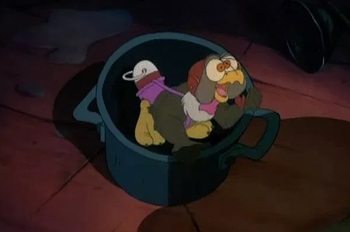 The Duke's annoying nephew who tries repeatedly to impress him, and ends up failing every time. 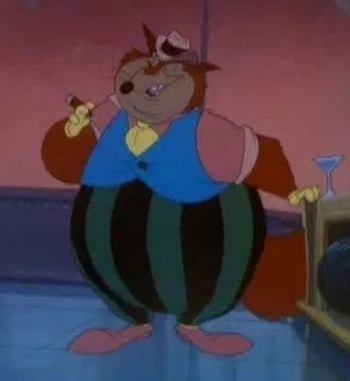 A greedy fox and Corrupt Corporate Executive who makes Chanticleer a star when he arrives looking for work in the city. Unbeknownst to the main characters, he's in the employment of (or at least allies with) The Grand Duke, and they both have a vested interest in keeping Chanticleer in the city; Pinky because "The King" makes him lots of money, the Duke because Chanticleer's crowing and sun-raising makes him miserable.
Voiced by: Sorrell Booke (English), Ricardo Lezama (Latin American Spanish), Toshiya Ueda (Japanese), Roy Bjørnstad (Norwegian)