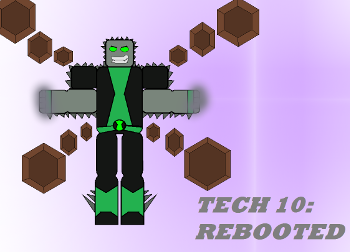 Back and better than last time!
"Hold on, my heart is pure! Pure, one hundred percent JERK!"
—Tech, Tech 10: Rebooted
Advertisement:

wiki following the adventures of a teenager named Tech, who uses a gaunlet-like device called the SpecTrix (Short for 'Specialty Omnimatrix') that can change him into a variety of aliens to fight evil, or whatever he views as evil, at least.

on January 30, 2012, Tech 10: Rebooted is a Continuity Reboot of the author's original 'Tech 10' series. This series is a Continuation Fic taking place shortly after Omniverse, and features a darker tone than the actual show.