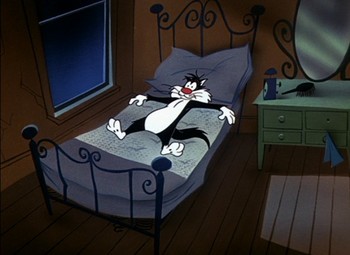 Tonight, ladies and gentlemen, we bring you a story about murder.
Hitchcock-type narrator
Advertisement:

"The Last Hungry Cat" is a 1961 Merrie Melodies short staring Sylvester the Cat and Tweety Bird. It was directed by Friz Freleng and Hawley Pratt.

One night, Sylvester tries again to get Tweety, but he makes a slip and falls dazedly to the floor, with one of the bird's feathers landing in his mouth. Tweety escapes unharmed, but when Sylvester sees the feather in his mouth, he thinks he has actually eaten the bird, suffering much guilt as an Alfred Hitchcock-type narrator chides the cat for his "crime." Sylvester ultimately decides to return to the scene of his crime to confess, only to discover, much to his relief, that Tweety is very much alive and unhurt.