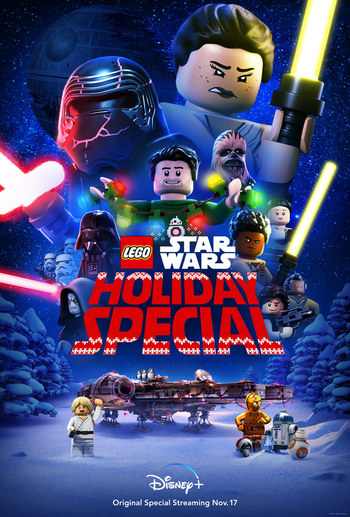 The plot picks up after the events of The Rise of Skywalker, with the surviving heroes arriving on Kashyyyk to celebrate Life Day with Chewbacca's family, much like the original special. Rey has been attempting to mentor Finn in the ways of the Force, but to no avail, so she consults the Ancient Jedi Texts and learns about "a key to the past" that might hold the key to her future, which can only be accessed on Life Day.

As Poe and the rest of the gang try to prepare for his Life Day party, Rey, alongside BB-8, set out on a trip to an abandoned Jedi Temple to search for the "key to the past", which turns out to be a crystal that allows them to travel through time.

Hilarity Ensues as Rey travels throughout the events of the Skywalker Saga and meets many familiar faces, initially traveling to events like Luke’s training on Dagobah to learn how to be a better teacher to Finn, but soon ending up having to try and keep the crystal out of the hands of Darth Vader and Emperor Palpatine circa Return of the Jedi, the latter wanting to use it so he can prevent his defeat, culminating in a massive clash between three generations of heroes and villains in front of the Lars homestead.

Will Rey be able to save the timeline, get back in time for Poe’s party, and learn the true meaning of Life Day?

Tropes in this holiday special include: