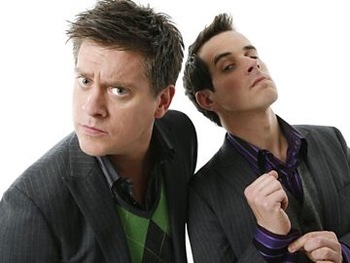 One series, 2011. Sitcom-cum-variety show, set backstage at a theatre; Dick & Dom play Dick and Dom, who run a comedy gig called Dick and Dom's Funny Business; all the scenes are set either in the green room, the theatre office, or on the stage (the Studio Audience play the theatre audience.) Other recurring characters are Kelly-Anne, the theatre owner's daughter, who has a crush on Dom; the usherettes; and two terrible would-be wrestlers who carry out a long-distance feud with Dick & Dom via video messages.

The acts who appear in the show-within-the-show are actual up-and-coming sketch troupes like Pappy's and the Penny Dreadfuls.

Every episode features a foolish scheme on the part of either Dick or Dom, and a special guest who must absolutely not hear of the shenanigans... Hilarity Ensues. Many, many homages and ShoutOuts to famous comedy routines and tropes- some of them contained in a “History of funny business” segment, which follows the Monty Python stage show “lecture on the history of custard pies” format, with “Subject A” (Dick) and “Subject B” (Dom) demonstrating slapstick routines while a voiceover explains the gag.

Tropes used in the show: