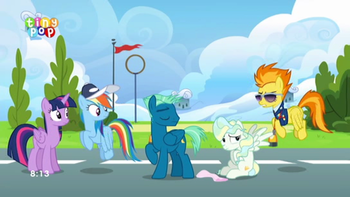 Rainbow Dash is looking forward to spending a week with her friends, having earned some time off from the Wonderbolts. Spitfire, meanwhile, is looking forward to Trials Week, in which new potential Wonderbolts are judged on if they're good enough to get into the Academy. As Dash is flying towards Ponyville, her flank glows, the map in Twilight's castle summoning her. As Rainbow arrives, however, she's disappointed to find that it's called her and Twilight to Wonderbolt headquarters, since Rainbow was just there.

Once Twilight and Rainbow arrive, they find Spitfire training a few new recruits. Spitfire says that she hasn't seen any sort of friendship problem among the recruits, but she also hasn't been looking. Twilight and Rainbow offer to help the recruits with a lecture on the basics of flying theory in class, where they meet the brash, confident Sky Stinger and the shy, meek Vapor Trail. The two had been friends since childhood, and both dream of getting into the Academy together. In private, Sky Stinger admits he's nervous about the upcoming solo tests for Vapor Trail, since she's an inferior flyer to him. However, in practice, Twilight and Rainbow both notice that Vapor Trail is intentionally flying poorly to give Sky Stinger a boost with the wind from her wings. Twilight suggests that they tell the two of them that they're holding each other back, while Rainbow suggests keeping it quiet.

As Vapor Trail heads for the showers, Twilight and Rainbow confront her, where Vapor admits that she helped Sky Stinger become better, while also not thinking about her own career as a flyer that much. Twilight says that she'll coach Sky on the basics, while Rainbow will help Vapor with more advanced tricks. Through practice, it's clear that Sky is nowhere near as good as he claims to be, and while Vapor does improve with Rainbow, she still holds herself back. When meeting up after training, Sky boasts that he still doesn't think the practice is worth it, which makes Vapor blurt out that she's been helping him. Sky tries to prove her wrong, but can't perform a trick without her. Angry that she's been lying to him, he accuses Vapor of trying to steal his spotlight and flies away, a dejected Vapor wandering off.

In the rest of training, Sky Stinger has lost all confidence and motivation. Spitfire tells Rainbow and Twilight to help him get his confidence back, and the two of them get Sky and Vapor close again. They say that Vapor was never trying to steal Sky's spotlight, and that Vapor should not have been content to take a backseat to Sky. The two friends make up, and begin helping each other in practice, both improving on their own. At the solo trials, both Sky and Vapor perform well, allowing the two to pass the test, entering into the Wonderbolt Academy.

With the friendship problem solved, Rainbow and Twilight head back to Ponyville, with Rainbow finally able to relax. Just as she sets herself down, Misty Fly appears, saying that a Wonderbolt emergency has come up, and that she's needed at the Academy again, causing a frustrated Rainbow to collapse onto the floor.

Alexis "Lexi" Heule, a Make-A-Wish member with congenital heart disease and connective tissue disorder, got to voice this one-shot in "Top Bolt".

Alexis "Lexi" Heule, a Make-A-Wish member with congenital heart disease and connective tissue disorder, got to voice this one-shot in "Top Bolt".