Recap / Out Of This World Little Lost Robot 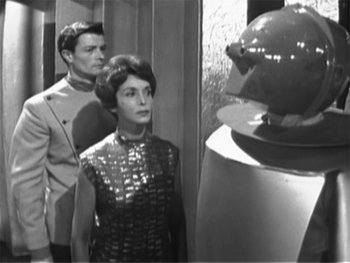 The second episode of Out of this World (1962), airdate 7 July 1962, is adapted from Isaac Asimov's "Little Lost Robot". Leo Lehman is credited with the teleplay, with Douglas James directing.

Boris Karloff introduces the episode by talking about the oxygenated rose he's holding, which has been sent to him from Hyperbase 7. Dr Susan Calvin (Maxine Audley) and Director Peter Bogert (Murray Hayne) meet with Major-General Kallner (Clifford Evans), who sent Boris one of his roses. General Kallner has a problem; a Nester robot (played by Roger Snowden), modified for "strategic reasons", has gotten himself lost in a crowd of twenty unmodified robots.

Mr Black (Gerald Flood) is the chief engineer of the secret project, and explains the situation to Walensky (Hayden Jones), an engineer who is mostly kept in the dark about the project, yet is the guinea pig put in danger when trying to find out which of the Nesters is the "missing" one.

Out of this World's "Little Lost Robot" provides examples of: