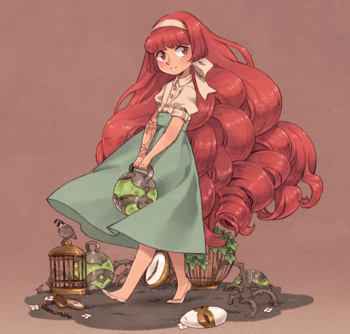 The youngest daughter and official priestess of the royal Llyn family, Tammy was kept hidden by the spirits of the Wickwold for centuries, kept young in both body and mind by the power of the Blindsprings there. However, due to Harris's meddling, she was forced to enter a much-changed (to her eyes) Kirkhall. 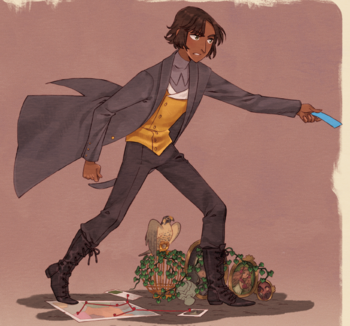 As a young boy, Harris was caught up in tales of the long-lost Llyn princess, so much so that he searched for her - and found and befriended her. Motivated to free her, he returned as a young man, and broke Tammy's contract. However, things did not go as he planned...

The Wayfarers as a Group
A group of Orphics who operate out of the Nawonan district. They used to be really active until an incident some time ago.
Ember 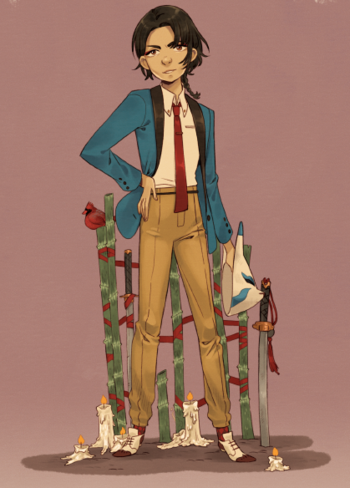 The current leader of the Wayfarers, Ember has a lot on their plate. Between trying to keep peace between the more militant and more passive groups of the Wayfarers, continuing their work as a photographer, and maintaining their relationship with Irelia...Ember is a busy Duine.
Irelia 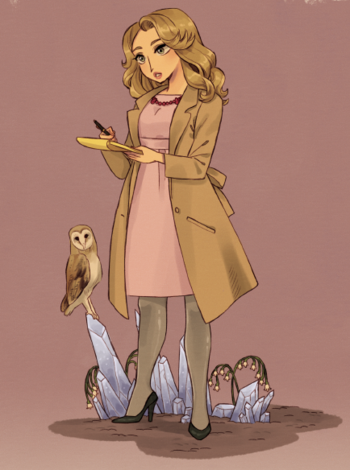 Oldest of the Thorne sisters, Irelia runs a boarding house when she isn't helping the Wayfarers or taking care of her younger sister Imogen. 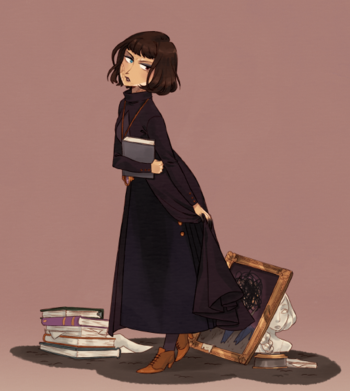 The second oldest of the Thorne sisters and former leader of the Wayfarers.
Imogen 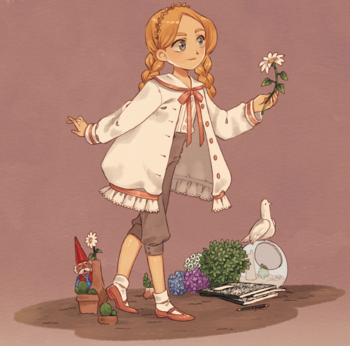 The second youngest of the Thorne sisters (and the youngest of Orphic blood among them), Imogen has led a mostly sheltered life. She wants nothing more than to join the Wayfarers and gain access to her full Orphic magic. For now, she settles for going to school and tending the old family garden.
Street 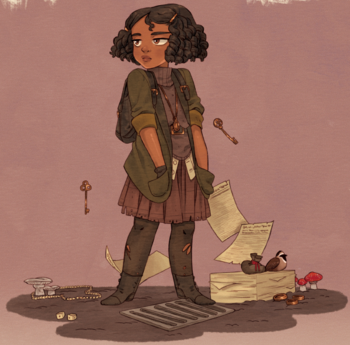 Imogen's best friend, Street/Elodie is an tomboyish Orphic orphan who looks after a number of other such orphans. Part of this includes having them work as spies and messengers for various people, including the Wayfarers.
Ariel 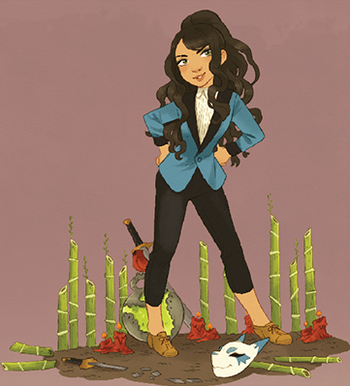 Ember's twin sister, and another member of the Wayfarers. Specifically, one of the ones who wants them to take an aggressive approach.

The Spiritualists as a Group 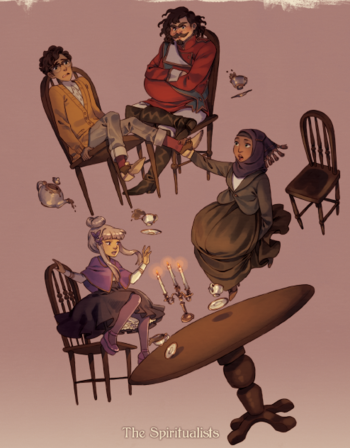 Clockwise, from the bottom left: Wisteria, "Howie", George and Dani

"We seek the light in the darkness"

A small group of Academists who seek the true nature of magic. They are much more open to the idea of Orphic magic than their counterparts. Harris is one of their members.
Wisteria

A "wealthy entrepreneur" Academist who acts as the head of the Spiritualists. She runs a high-end boutique selling Academist premade spell cards and fosters orphan or abandoned Orphic children.
Howie

Another contemporary of Harris and member of the Spiritualists, who has a habit of snooping around in search of a story. He's a reporter with the local newspaper and a close associate of Ember, which probably explains his pro-orphic sympathies.
George

A member of the Spiritualists, he can really talk... a lot. He's also a General.
Dani

An associate of Wisteria and Harris, also one of the Spiritualists, she is also investigating into the incident plaguing the town. She's a detective of the National Intelligence Agency. 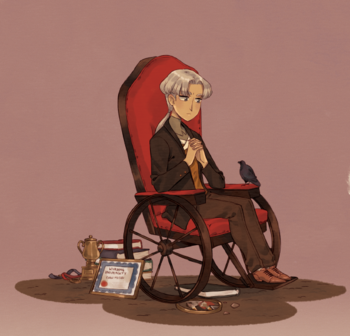 Regarded as a prodigy among Academists, Ewan is very devoted to their cause. He worked on top secret projects for them before, so secret that he won't even tell Harris, despite their relationship. Even though it probably cost him the use of his legs.
Asher 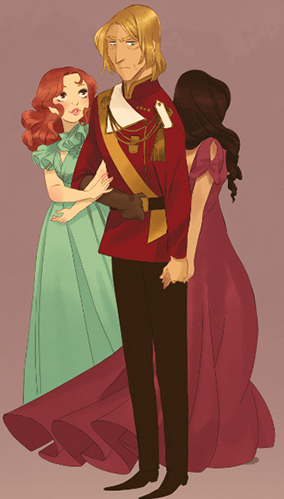 The father of the Thorne sisters, Asher's work as the Prime Minister of Kirkwall leaves him little time to connect with anyone. The betrayal of his first wife did not help matters.
Gregoire

The most renowned Academist and the one responsible for toppling the Llyn family three hundred years ago.

The Academist responsible for the creation and oversight of Gravers.
The Peters Twins 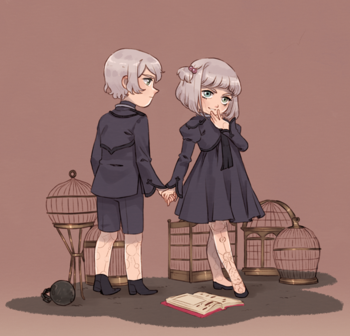 From left to right: Tristan and Rhiannon.
Graver twins who came to Kirkhall along with Master Lumens. Rhiannon is the more unstable of the two while Tristan is much saner.

A young Graver girl who seems to take everything she does in stride.

A young Graver boy and brother to Rhiannon.
Becky 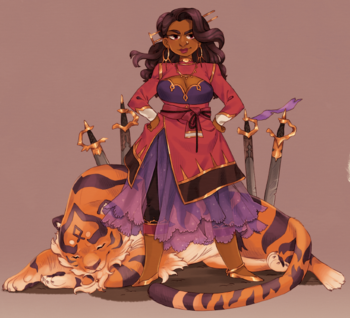 Niece of the Emperor of Khala, she was sent as a diplomat to ease tensions between Aberwelle and her country. This also gives her the freedom to pursue other goals, like seeking out those of Orphic power...
Ms. Thorne

Asher Thorne's first wife, mother of the Orphic Thorne sisters and the last member of the ancient Torstenn family. Six years ago she was arrested by her own husband in her own house, apparently for reading Orphic history to her daughters. Her whereabouts are unknown.
Giselle

Only daughter of Asher and Giselle, Lottie is the orphic Thorne sisters' younger half-sister.
Millie

Spirits as a whole
Beings that exists as residents of the world, they are now often thought of as fictional beings.
The Wickwold Forest Spirits 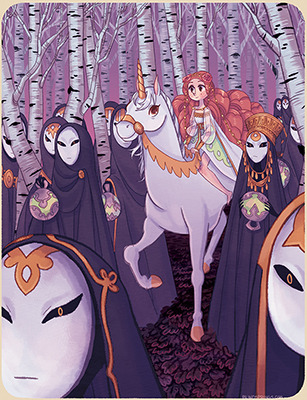 The spirits who watched over Tamaura for three hundred years in the Wickwold Forest in order to uphold the contract. After she was abducted by Harris and was forced to join civilization in Nawonan, the Chief follows her via possesing a quail to "guide" her in her new mission.
Kieran / Faust 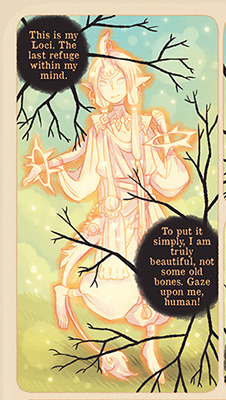 The spirit within the fountain of the blindspring that Tamura first visited, the Quail Spirit refers to it as Kieran.
The Cistern Spirits 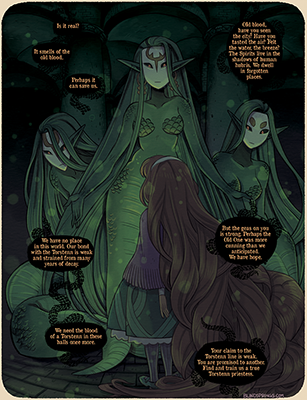 The spirits within Torstenn Boarding House blindspring leading from the laundry room.
The Rain Spirit

The cute and small house spirit within Torstenn Boarding House, it follows Tammy around. 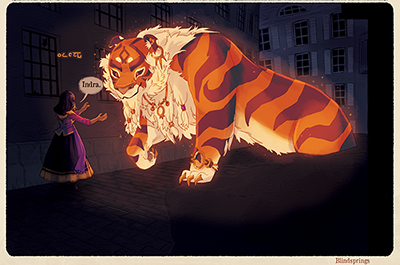 A huge tiger-like spirit summoned by Rajani.
The Tree Spirit
A dying spirit who asked Tammy's help in the middle of Ariel's struggle with the Academists. After Tammy revived its blindsprings, Ariel made a contract with it: she'll be its priestess and the spirit will keep Ember safe.