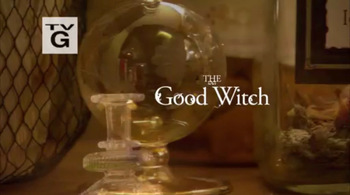 Is she a good witch or just a good person?
"[excited] It's true! She's a witch, a real-life witch. But a good witch."
Lori Russell
Advertisement:

The small town of Middleton get a shock when the local haunted house, Grey House, finds itself a new owner: the mysterious Cassandra Nightingale. Who is this woman? Where did she come from? And why does it seem that ever since she's showed up things in town have gotten a little more... magical?

Starting out as several TV movies before spinning off into a television series, The Good Witch stars Cassie Nightingale (Catherine Bell) as she makes a home including finding love with Police Chief Jake Russel (Chris Potter) and a family with Jake's two young children. Of course not everyone is as welcoming including the mayor's wife Martha Tinsdale who believes that "Miss Nightingale" is bad for their town. Despite evidence to contrary...

What's interesting about Cassie's story is that despite the title, it's deliberately kept vague whether she has any real powers with many of the problems of the films and show are solved in rather mundane ways. The franchise focuses on the lives and experiences of those living everyday lives in Middleton rather than any supernatural elements that may, or may not, exist in the series.

A year later in 2015 the TV spin-off aired, fast-forwarding to when Cassie's daughter is a teenager and her own growing gifts as witch while dealing with ordinary teenage problems.

It should not, in any way, be confused with the webcomic of the same name.

Warning: This page cover events from across the films and nods to the sequel televison series. Beware of spoilers!