Recap / Game of Thrones S1E5 "The Wolf and the Lion" 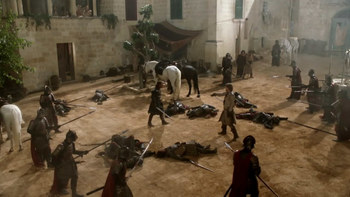 As dawn breaks on the second day of the tourney in King's Landing, Lord Eddard Stark, Hand of the King, comes down to visit the corpse of Ser Hugh of the Vale, slain the day before in a joust with Ser Gregor "The Mountain" Clegane. Ned is not only concerned over the body receiving proper treatment, but is curious as to how this boy Hugh, knighted only a few months ago, could afford a new suit of armor. However, Ned is soon distracted from his detecting by the news that Robert plans to enter the lists. Ned is able to dissuade him only by pointing out that all the knights in the kingdom will lose to him in the hopes of currying favor. (He's also too fat for his jousting armor.) Ned also gets another disquieting clue by noticing that Robert's squire Lancel is, of course, a Lannister, foisted on him by Cersei.

The next tilt shown is between Ser Gregor Clegane against Ser Loras Tyrell, called "The Knight of Flowers," by universal acclaim the prettiest knight in the Seven Kingdoms. He wins by riding a mare in heat, causing Clegane to have trouble controlling his stallion. Whilst Littlefinger and Sansa debate whether this makes Loras a Combat Pragmatist or a cheater, The Mountain, turning out to be a massively Sore Loser, deals with his recalcitrant horse by hacking off its head and then going after his opponent. He is stopped only by the intervention of his brother The Hound, and then the booming commands of his king. For his decisive action, Sandor Clegane is proclaimed the hero of the day.

On the eastern road, Tyrion is unhooded and discovers that Catelyn is taking him to the Eyrie, ruling seat of her sister, Jon Arryn's widow Lysa, despite having announced ("often, and loudly") that they were making for Winterfell. The ragged party, including a sellsword named Bronn and a singer named Marillion, are almost immediately waylaid by one of the Mountain Clans of the Vale, and Tyrion first shows his Badass Bookworm side by beating one of them to death with a shield. Tyrion ends the battle in much better state than he began: no longer tied up, a bit of rapport with Bronn, and doubts planted in Catelyn's mind after he points out, correctly, that had he sent a mercenary after Bran, he would not have armed the man with his own blade.

At Winterfell, Bran plays Mister Exposition as Maester Luwin quizzes him on the major houses of Westeros. Bran's resentment over his now-Missing Mom comes out, but there's a spark of hope as well when Maester Luwin mentions that the Dothraki are excellent mounted archers. Theon, meanwhile, works out his resentments over his family issues by mounting Ros from behind. He's a hostage of House Stark and hasn't seen his actual family for more than a decade. This will be important next season.

In King's Landing, Ned consults with Varys. Varys, as per usual, bears bad news: the king is in great danger and Eddard Stark is the only one who can save him. Varys, like the queen, has bided his time to try and get the measure of their new Hand, and Varys (at least) has come to trust him. He reveals that Lord Arryn was killed by a poison called "the tears of Lys," and implies that the poisoner was the former squire, Ser Hugh. When asked why Lord Arryn was killed now and not any time in the seventeen years of his Handship, Varys only replies, "He started asking questions."

Meanwhile, elsewhere in the Red Keep, Arya is chasing a cat as per her instructions from Syrio. It flees into a storage basement crowded with dragon skulls—hey, remember Viserys's ruminations last episode? There's the answer!—and then ducks into the shadows when two strangers walk by holding a cryptic conversation. It's Varys—and Magister Illyrio, the man who sheltered the Targaryen siblings in Pentos! Conspiracy! They recap what has happened so far with between the wolf and the lion, discuss whether Khal Drogo is ready to invade, and imply that Ned's sleuthing might put him in danger. Arya hurriedly returns to their house to warn her father—and is mistaken twice for a boy in the process—but can only recount bits of the conversation, since she didn't understand half of it, lacks the context for the rest, and has no idea who the conspirators were. (In the book, she can only describe them via appearance since she's never met either of them, and Varys, a Master of Disguise to begin with, is unrecognizable anyway. Unobservant readers might never have figured out their identities at all.) And while she manages to blurt out that they suggested killing Ned, death threats aren't really news to him. In the end, she is led away by Jory whilst Yoren, who was present for Catelyn's little kidnapping enterprise at the end of the last episode, drops in and updates Ned on what he saw.

Varys, meanwhile, goes on to have a conversation with Littlefinger in front of the Iron Throne, in which Baelish reveals he knows about Illyrio's brief visit and Varys taunts him with his knowledge of the weird fetishes Littlefinger's brothels accomodate, not to mention his instigating Catelyn Stark's capture of Tyrion Lannister. Each has the other over a barrel, and both of them know it, but neither is able to act on their threats before real news arrives from abroad. "The WHORE is pregnant," Robert growls. The information is from Varys's spy, Ser Jorah Mormont, a slaver and a man of questionable repute, but Robert is too angry to be wise. He gives orders to have the Targaryens slain, and though the Hand argues strenously against it, the Small Council falls in line. When Eddard sees that he will have no support, he resigns his Handship in protest, and departs the chamber with Robert's furious rants echoing behind him.

Having reached the the Eyrie, Catelyn's audience with her younger sister Lysa goes rather differently than anyone expected—except maybe Tyrion, who warned her that Lysa has changed since Catelyn last saw her. For one, Lysa is absolutely paranoid and is cowering in the Vale from perceived enemies. For two, her son is a spoiled and creepy brat—he's eight and she's still breastfeeding him. Lysa tells Catelyn that her letter was a warning, not an invitation... but now that she's got Tyrion, she accuses him of slaying Lord Arryn as well. ("Oh!, did I kill him too?" Tyrion replies with enviable sarcasm—he basically hits every note short of telling Lysa to go drink some Hershey's syrup so the kid can have chocolate milk. "I've been a very busy man.") Tyrion is locked up in the sky cells despite Catelyn's protests.

We return to King's Landing, just in time for Loras and Renly to have a Shirtless Scene! Loras is shaving Renly's chest! They're both petulant, whining and complaining about how unfair life is! Loras thinks Renly would be a much better king! Renly gets faint at the sight of blood! ...Seven hells, Loras is going down on Renly! Unlike the books, we're not gonna need Word of Gay about these guys any time soon! Boy, that's some noisy stuff going on down there! ...Sorry, where were we?

Whilst Ned packs furiously, Robert and Cersei fret over what to do if the Dothraki do invade, and the absolute PR disaster it would be. They then have a startlingly heart-felt conversation, toasting each other and 17 years' mutual resentment, and wonder whether they ever had a chance at making their marriage work. (The verdict: Lyanna says no.) As for Ned, he's distracted when Littlefinger offers to take him to "the last person Jon Arryn spoke with before falling ill." It's a whore, barely more than a child, who has borne Robert Baratheon's bastard baby. "She looks like him, don't she, m'lord? She has his nose, his black hair." Jon Arryn, when he came to visit, merely inquired into the health of the child; Littlefinger doesn't know why. But as they leave, a new problem emerges: the Kingslayer rides up with a score of Lannister guardsmen and demands the return of the Imp. While Littlefinger runs to summon the gold cloaks, Jaime has Ned's three guardsmen killed. Wil and Hewett go down on the instant; Jory gives a good account of himself, but he's no match for the Kingslayer. But Ned Stark is, and the wolf and the lion go at it in a furious Sword Fight that ends only when one of the Lannister guardsmen, on his own initiative, stabs Ned through the thigh. Jaime smacks him to the ground with the hilt of his sword for interfering, then the Lannister contingent rides away, leaving Eddard Stark in the street with his dead.