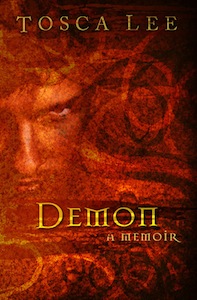 Demon: A Memoir (sometimes referred to as simply Demon) is a 2010 Christian supernatural novel by Tosca Lee.

Failed writer Clay is struggling through depression from his recent divorce and the lackluster of his editing job at a tiny Boston publishing house. One night he meets a mysterious stranger called Lucian, who has only one thing to say: “I’m going to tell you everything. I’m going to tell you my story … and you’re going to write it down and publish it.”

At first Clay refuses, but then Lucian begins showing up everywhere he goes, in many different forms, eventually convincing Clay that the story he has to tell is worth putting up with Lucian’s…oddities.

So what is Lucian’s story? The Biblical account of humanity, from the other side’s point of view.

Clay quickly becomes riveted by this new understanding of the world’s most well-known epic. Dragged into a story that quickly becomes an obsession, he gradually finds himself facing the fallout on a philosophical, practical, and even legal level—and the understanding that Lucian, despite revitalizing Clay’s life, is very definitely not benign.

The novel’s page on the author’s official website can be found here.

Demon: A Memoir contains examples of: