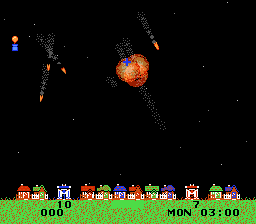 One missile takes out two
Thwaite is a 2013 video game for the Nintendo Entertainment System in which the player must defend a cute little village from incoming missiles using missiles.
Advertisement:

The ROM is freeware, available from the developer's web site