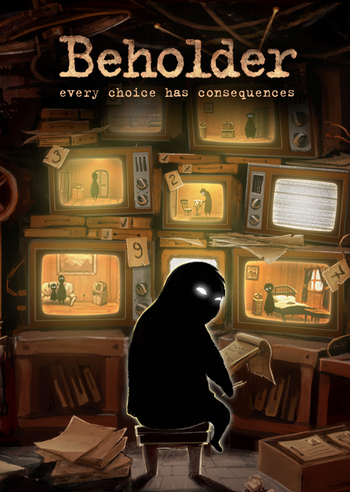 Laws are oppressive. Surveillance is total. Privacy is dead.
You are Carl Stein, family man and newly appointed landlord of a state-run apartment building. Your job is to shore up the shoddy mess of a complex the previous landlord left behind, find new tenants... and observe and document their each and every action for the good of the State.
Advertisement:

Carl is injected with a sleep-suppressing serum and provided with hidden cameras to allow him to monitor, document, and report on his tenants' each and every move, 24 hours a day, 7 days a week. In between his responsibilities as a landlord and the requests of his tenants, Carl will also need to make sure to take care of his family, ensure the bills are paid, and deal with any unexpected complications along the way while stalwartly upholding the law of the State. Any and all infractions must be reported, no matter who is at fault! To do otherwise incurs severe fines... but is it always the right thing to do?

Beholder is best described as a mix between a building management simulator, Papers, Please, and This War of Mine. As expected of a game than draws heavily from Papers, Please, it features many more complications, bills, and deadlines than can be met with good and honest gameplay, requiring Carl to engage in theft, blackmail, and potentially even the planting of evidence and subsequent arrest of tenants in order to make ends meet.

, was released for Steam on May 18, 2017 (in which the player takes control of Hector Medina), and came bundled up with the game in the Complete Edition, which was released for PlayStation 4, Xbox One, and Nintendo Switch in December 2018.

Beholder 2 was also released in December 2018 with players controlling a department officer within the Ministry itself.

A third game, Beholder 3, was announced on April 7, 2021, and released on March 3, 2022. In it, players control a former ministry officer who was set up into losing his job, and now has to spy and survey in order to repay favors owed and conspire his way back to the top.

Not related to the iconic Dungeons & Dragons monster or the Video Game series based on it, Eye of the Beholder