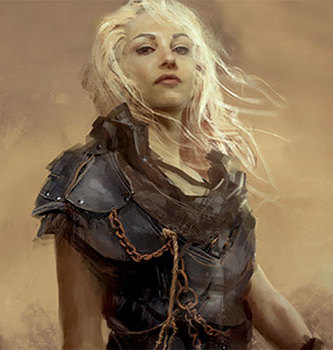 Not a woman to be trifled with.
"Kol Adair lies far to the south in the Old World. From there, the Wizard will behold what he needs to make himself whole again. And the Sorceress must save the world."
— from Nathan Rahl's Life Book
Advertisement:

Following the footsteps of the Sword of Truth series, the adventure continues, but not for Richard, Kahlan or the Sword. Here, they are relegated to backstory and mentions only. The titular Sister Nicci and Nathan Rahl take the main stage as the primary characters as they journey across the Old World to help Lord Rahl consolidate his power and bring peace and prosperity to a new golden age.

If only it were that easy.

Joining them for the journey is Bannon Farmer, a young lad from Chiriya Island, who chances to cross paths with Nicci, and winds up accompanying them on their quest. While many lands and cities are welcoming to her mission of peace, some lands, she finds, remain troubled, aloof, or even downright hostile. The books are as follows: