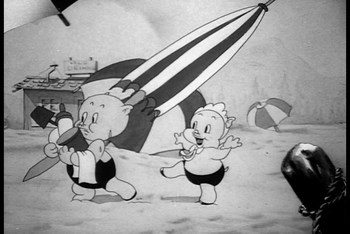 The cartoon is set at a swimming hole, with a group of cartoon animals getting ready to enjoy the day and prepare for a race later on. Among them is Porky Pig, who has brought his nephew Pinky along for the occasion. Porky tries to enjoy himself throughout the cartoon, but his nephew and a couple of beach patrons give him no shortage of trouble before he decides to take part in the swimming race.