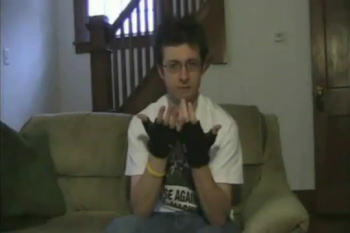 "I got nothing."
"I take great pleasure in soda consumption, pushing buttons, and running around various objects."
Advertisement:

Scott Ramage, better known as SCXCR (or SCR to his friends) is a YouTube reviewer and member of River City Gamers

He makes several series, including:

Games (and other materials) he had reviewed or discussed (not counting the Bloody Roar series):

Multiple Gaming Personalities
Mr. Game Player
The following that is marked with * are done in his in three minutes spin-off
Just Play Along
Five Dollar Gaming
SC On
I Wanna Play
The following marked with * is unfinished)
Vlogs and Impressions
[fearless]
Check his work out on Youtube

, as well as his blog