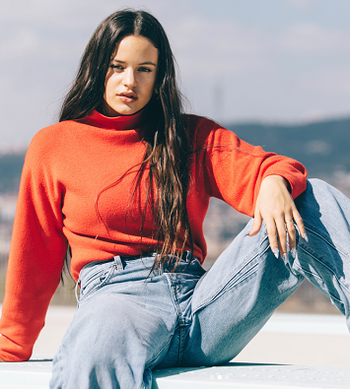 Rosalía Vila Tobella (born 25 September 1993), known mononymously as Rosalía, is a Spanish singer, songwriter and producer from Barcelona. Her music is inspired by the genre of flamenco, making a modern interpretation of it.

Her debut album, Los ángelesnote "the angels" was released in 2017, and was mostly composed of acoustic takes on old flamenco songs centered around the themes of death. Made in collaboration with guitarist Raül Refree, it gained a lot of critical acclaim in her home country due to her vocal performance and became a Sleeper Hit.

After collaborating with Colombian reggaeton singer J Balvin on the hit album Vibras, she started teasing the release of her second album with the single "Malamente"note "badly". It became one of the most successful singles of the year in Spain, marking the change of her trademark acoustic flamenco style for something more inspired by experimental R&B and Electronic Music.

Finally, El mal querernote roughly translated as "the bad loving", a Concept Album inspired by an obscure Occitan novel of the 13th century, was released in November 2018, to widespread success and acclaim both in Spain and the rest of the world.